The 13th round of the candidates tournament turned decisive. Viswanathan Anand needed a draw to get very close to the overall victory. Only his opponent Sergey Karjakin could spoil his plans, and Levon Aronian, if he defeated Dmitry Andreikin. 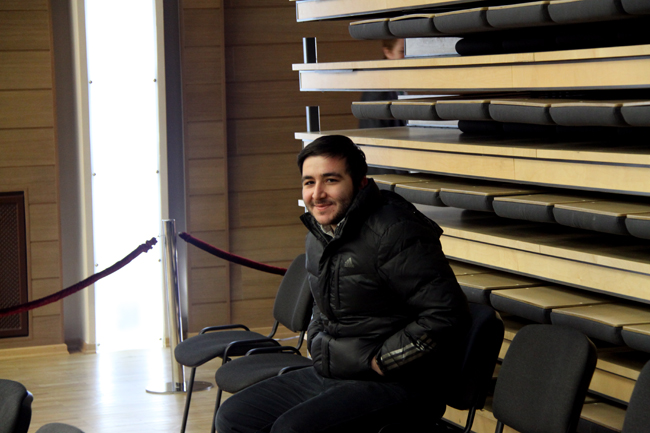 Shakhriyar Mamedyarov came together with his second and friend Eltaj Safarli. 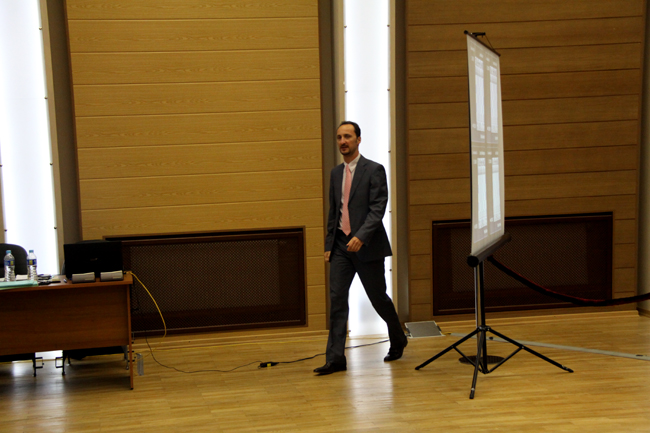 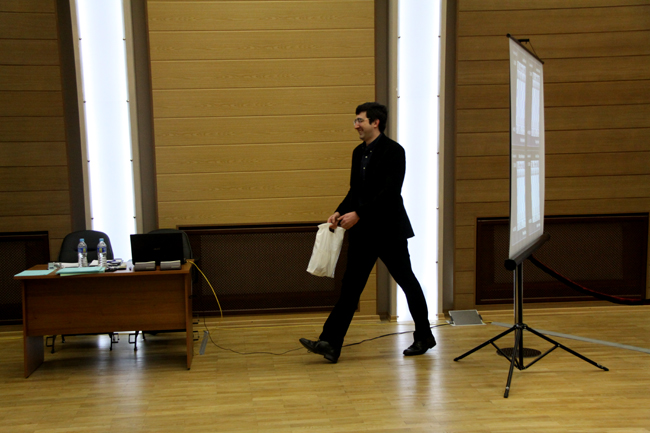 He is followed by his rival Vladimir Kramnik. 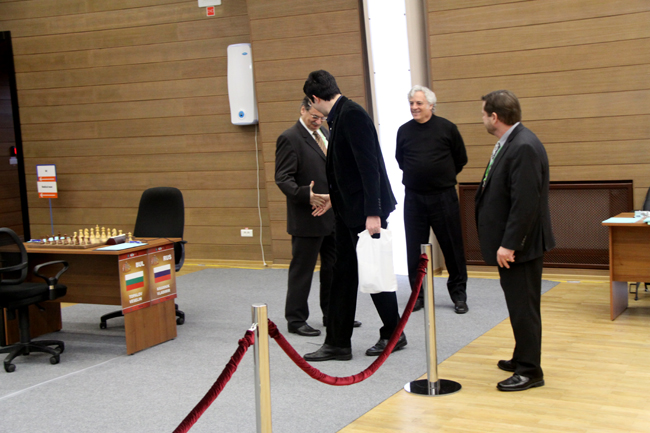 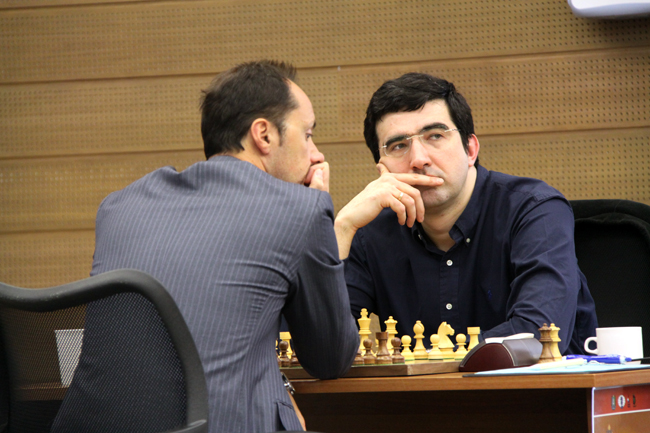 Will Kramnik avenge his first half loss? 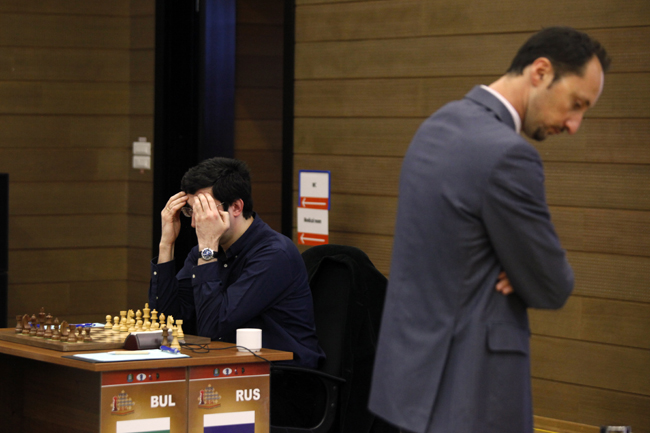 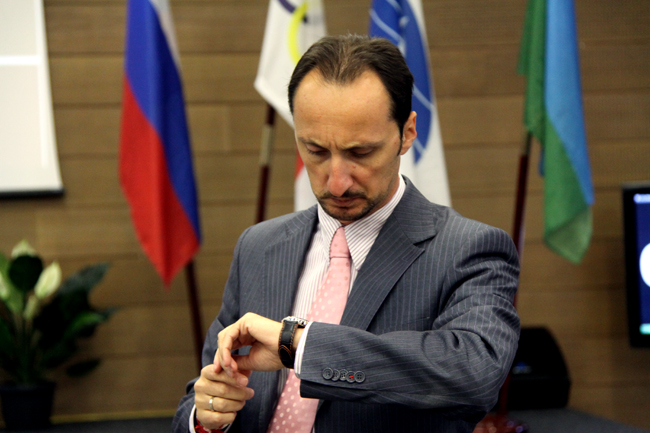 When do we start? 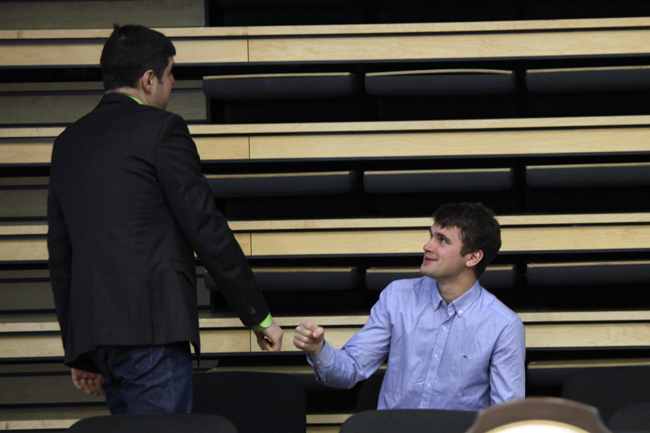 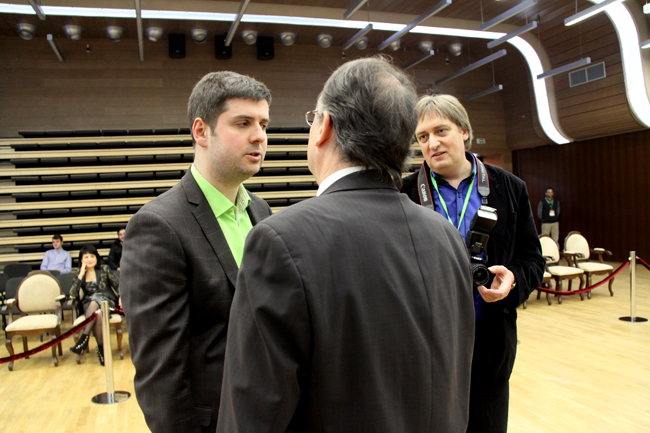 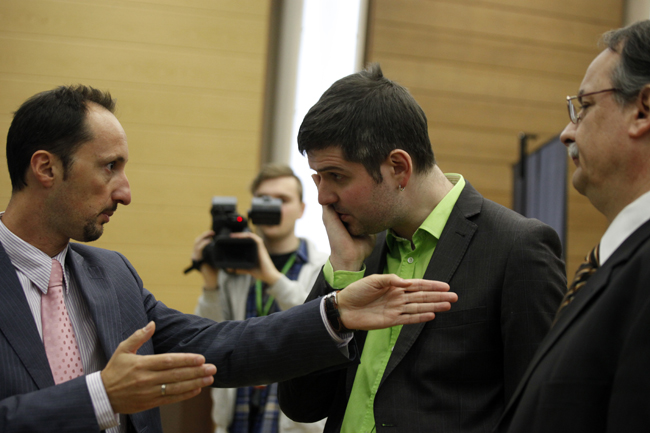 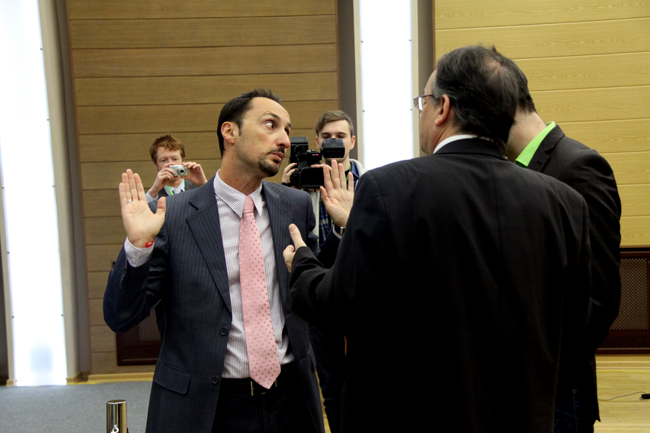 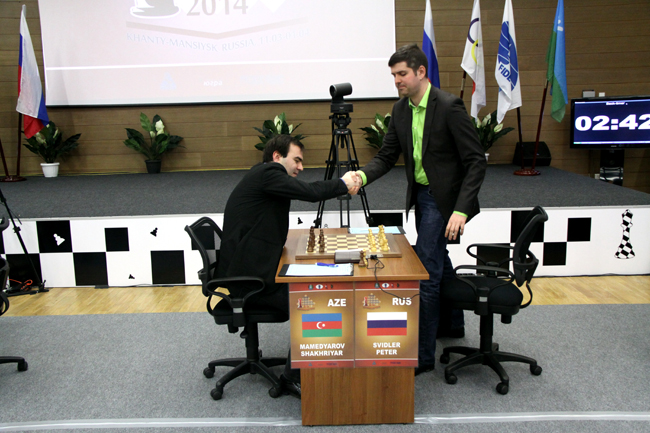 Peter only could go to his table, already awaited by Shakhriyar Mamedyarov. 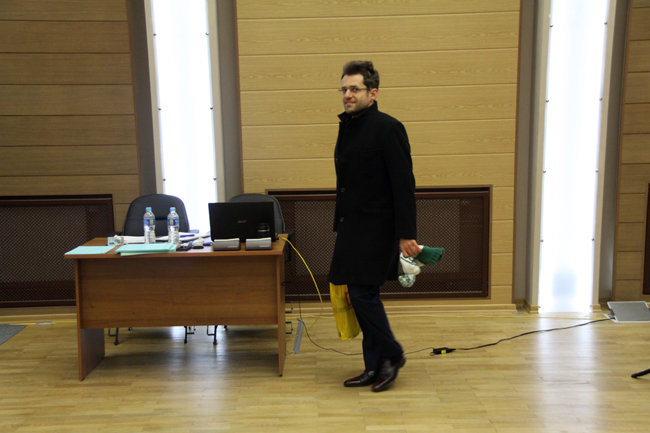 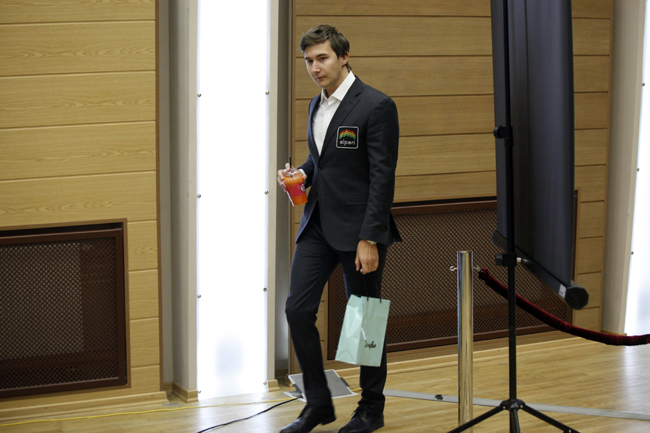 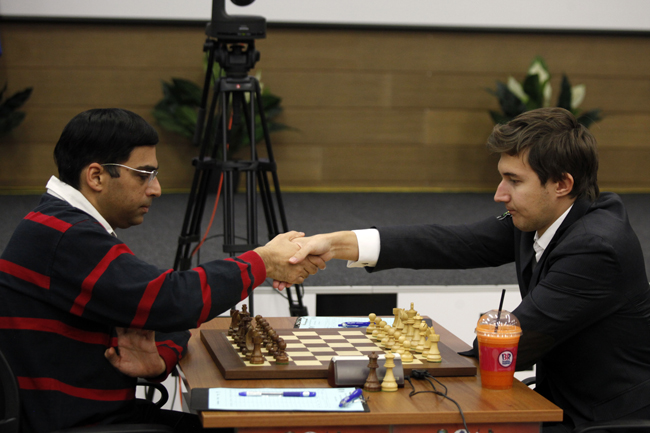 The main game of the day – Sergey Karjakin versus Viswanathan Anand. 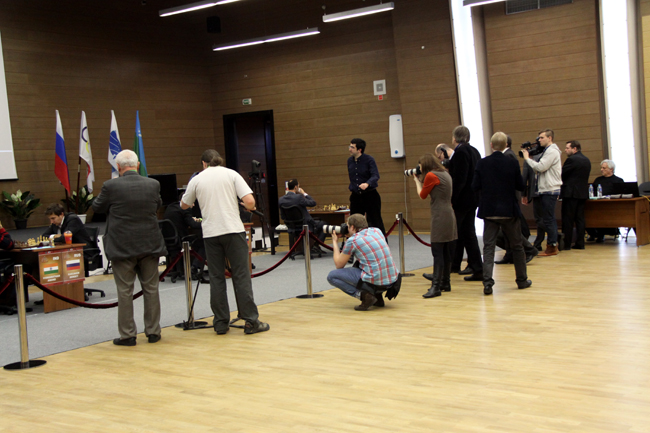 A couple of minutes after the start of the round. 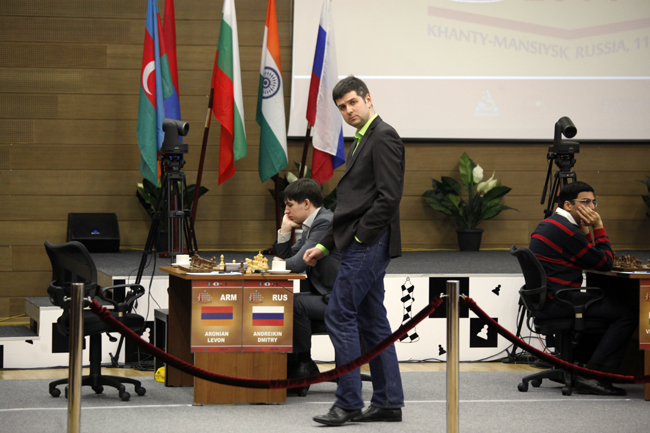 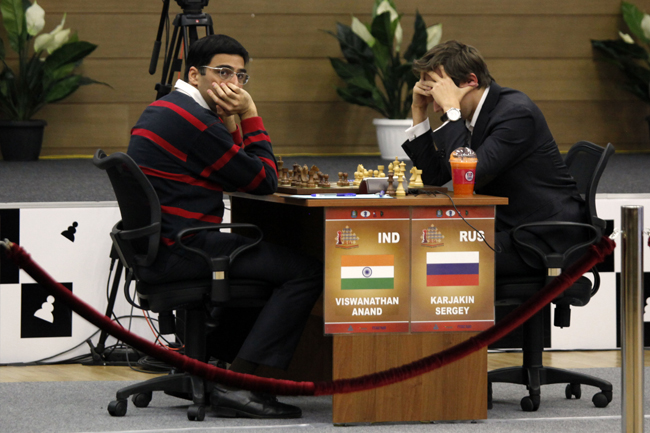 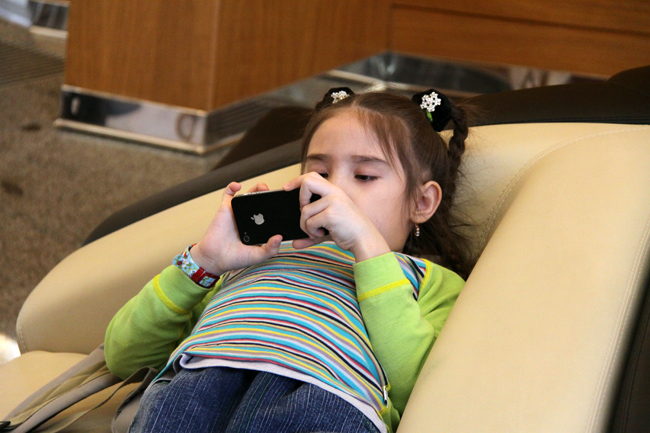 Who knows, maybe this girl is playing against Magnus Carlsen on his iPhone app? 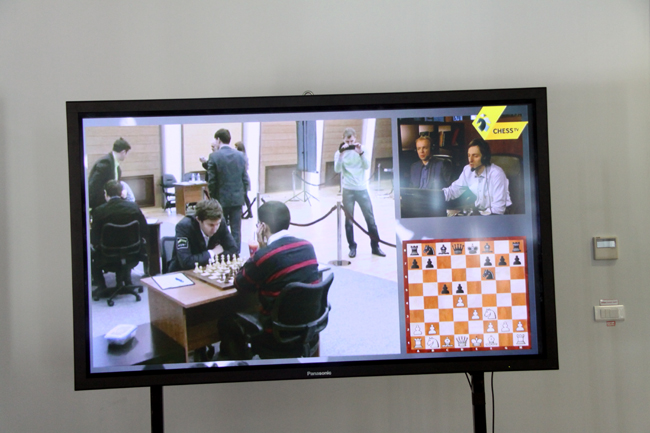 Sergey Shipov commented today with Alexander Grischuk, and Magnus Carlsen himself joined the English-speaking commentary for an hour. 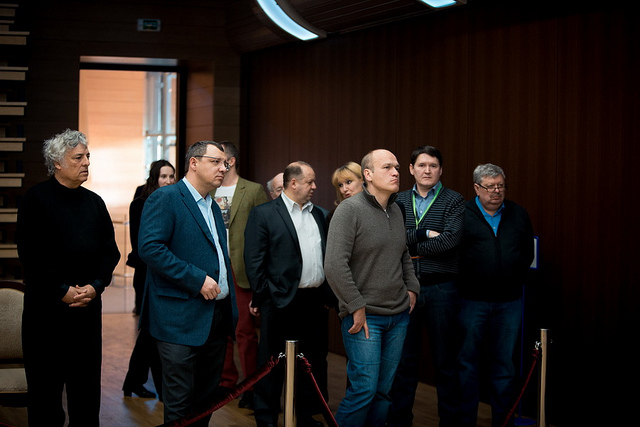 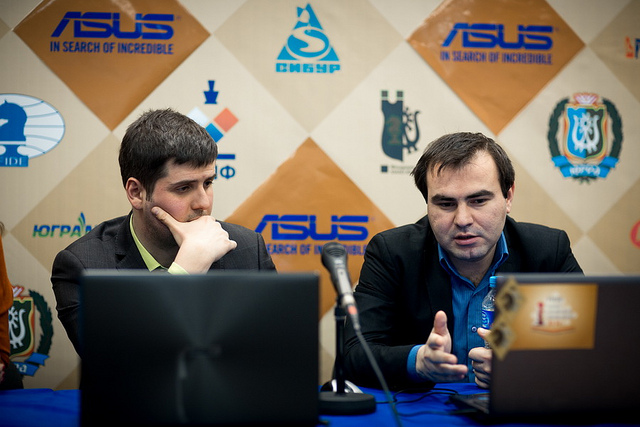 Peter Svidler and Shakhriyar Mamedyarov analyze their game at the press-conference. 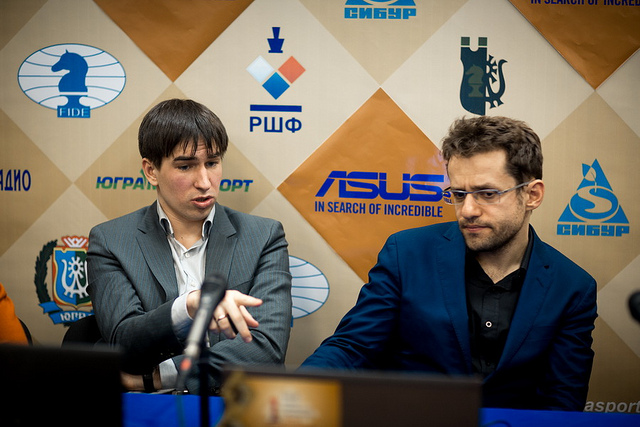 Dmitry Andreikin: “I am not very tired, but I want to go home to see my baby. If I could play another candidates tournament in a month, I’d happily do that”.

Levon Aronian: “In this tournament I felt much better than a year ago in London. However, my level of play in the second half was for some reason the same as there”. 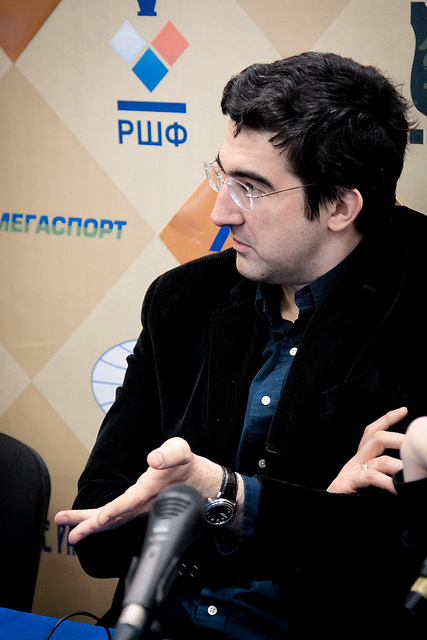 Vladimir Kramnik: “Dut to many reasons I am very happy to win tonight. Thanks to this game I am ending the tournament in a more positive mood”. 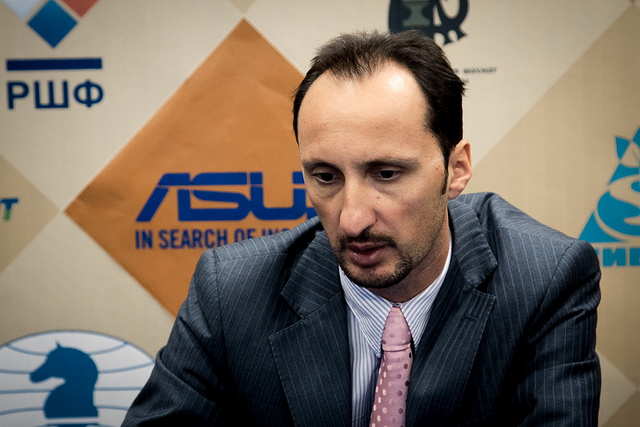 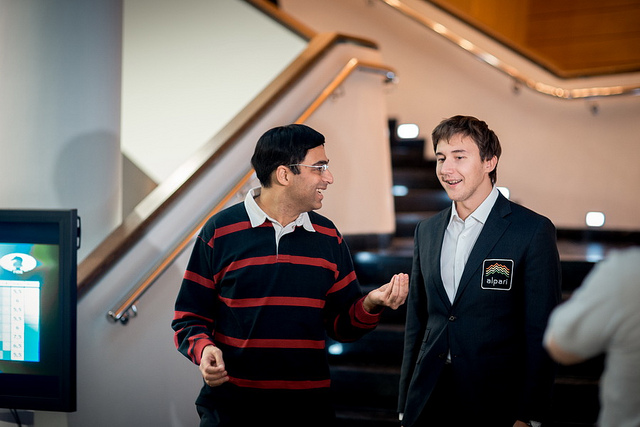 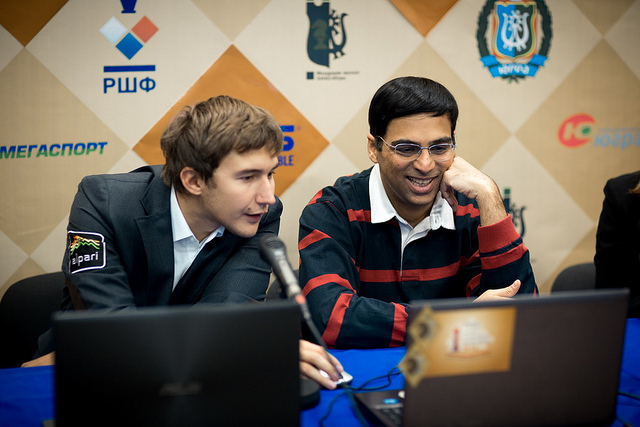 The game between Sergey Karjakin and Viswanathan Anand ended after six hours of play. Anand made a draw and secured a victory in the candidates tournament. His press-conference began with the applause from the media.

Viswanathan Anand: “I didn’t expect to have two more competitors. First I only followed Aronian, but by the end of the tournament Svidler and Karjakin could join the contention by beating me”.

Sergey Karjakin: “Of course I was eager to fight. Perhaps my opening was not very ambitious, but it kept pieces on the board. At some point I realized the game is going to end in a draw, although earlier I was quite happy about my position”.

Viswanathan Anand: “Well, it couldn’t be an easy draw, because we made 70 moves” (laughs).

A question to Anand: “Aren’t you tired of playing World Championship matches?”

Vishy Anand won the tournament with a round to spare and deprived up of the last round thrill, but let us hope to see another round of exciting chess tomorrow!