On 13th of March the main tournament of the year – The FIDE Candidates Tournament – started in Khanty-Mansiysk. Over the course of 20 days the eight strongest chess players of the world will be competing for the right to challenge Magnus Carlsen in the World Chess Championship Match.

With sinking hearts we will be observing the struggle in Khanty-Mansiysk. And now let’s take a look at the participants’ mood and the atmosphere of the Ugra Chess Academy. 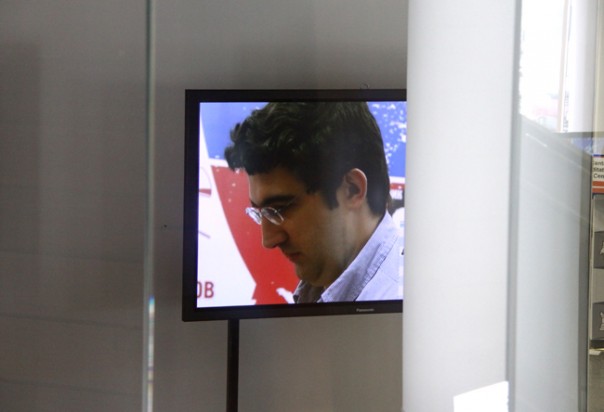 Chess TV’s commercials are on the monitors. We can see one of the candidates – Vladimir Kramnik. 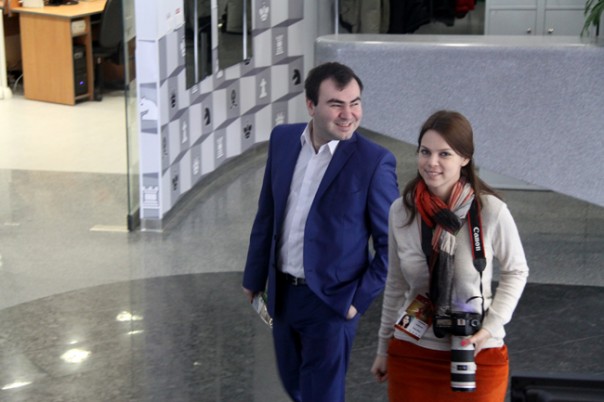 The FIDE Press Officer Anastasia Karlovich brightened up the way to the playing hall for Shakhriyar Mamedyarov. 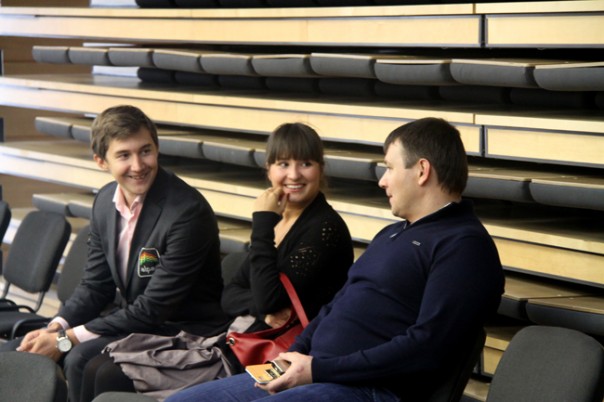 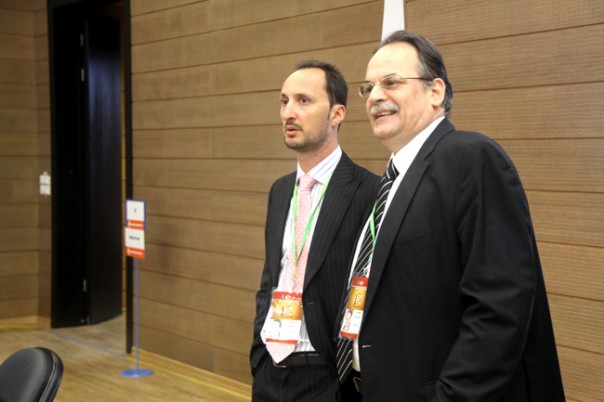 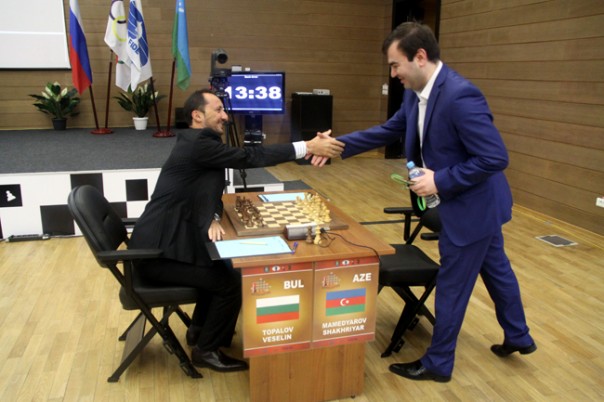 The opponents are greeting each other. 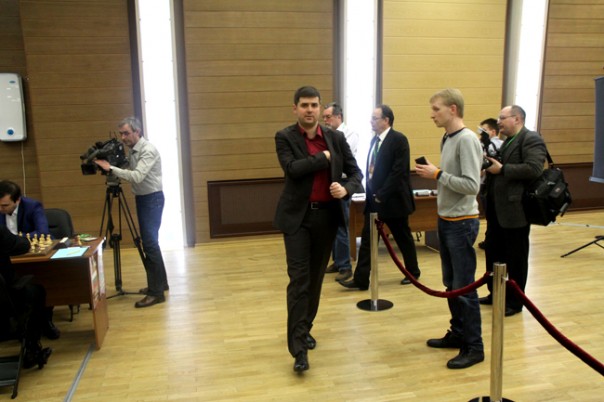 The elegant Peter Svidler is appearing in the playing hall. 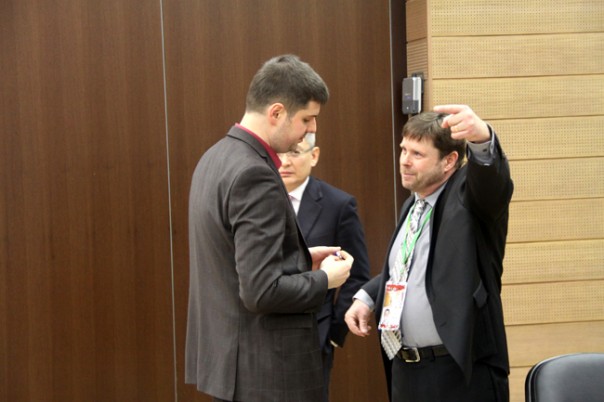 Deputy arbiter Hal Bond is acting like a pointsman. 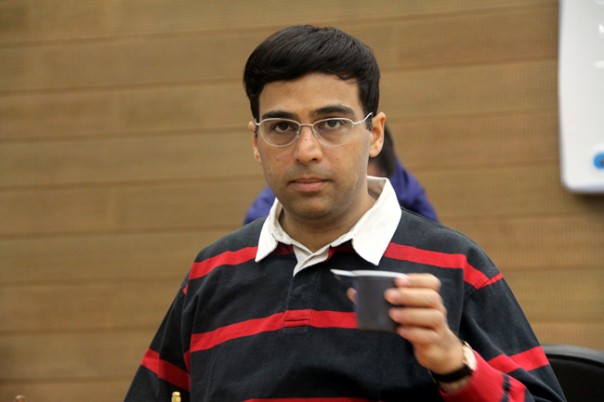 Viswanathan Anand is warming himself with a hot drink. 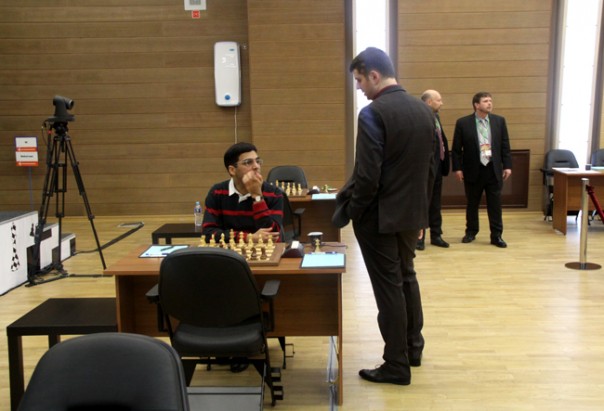 Are the players talking about dress code? That’s a secret! 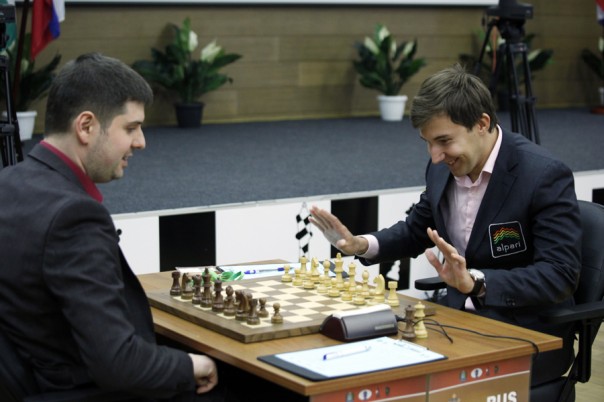 “Anything but outplaying me!” 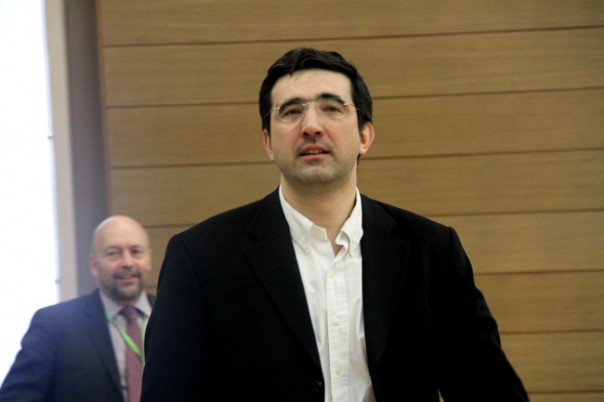 Vladimir Kramnik is approaching his seat. 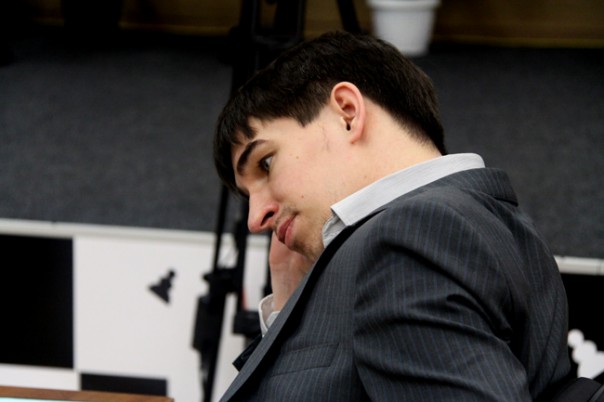 His opponent Dmitry Andreikin is focused. That’s natural, for one should properly make up his mind to fight against the ex-world champion. 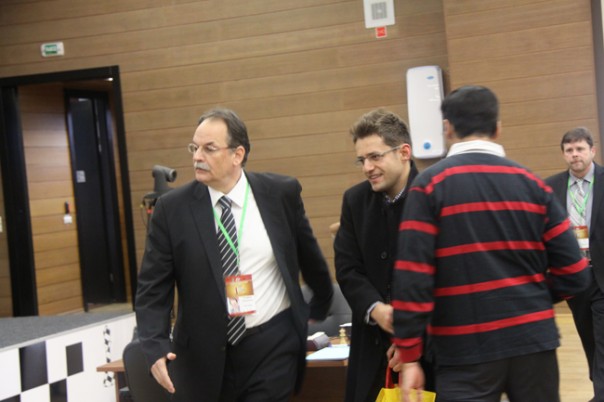 Levon Aronian is joining his colleagues. 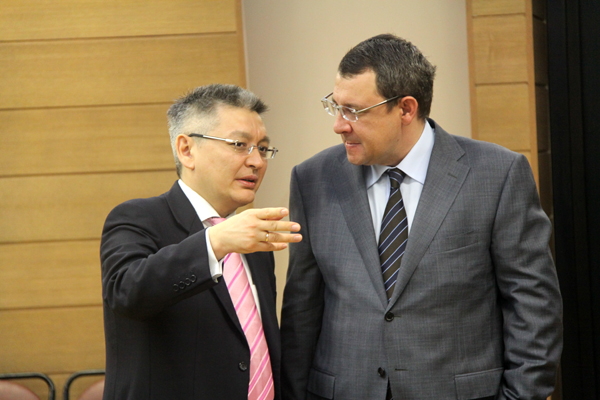 Director of the FIDE Moscow Office Berik Balgabaev and the Head of Khanty-Mansiysk, President of Ugra Chess Federation Vasily Filipenko. 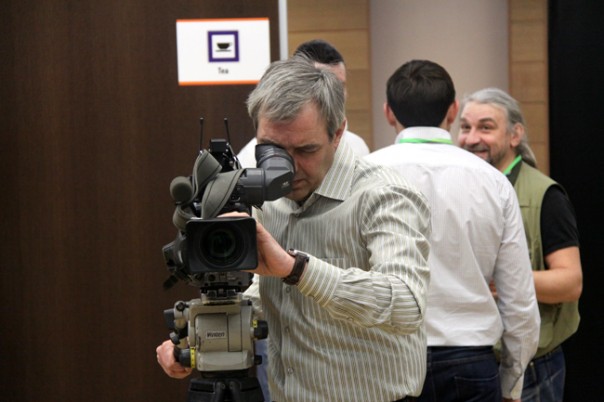 Photographers and operators are eager to work as much as the chess players. 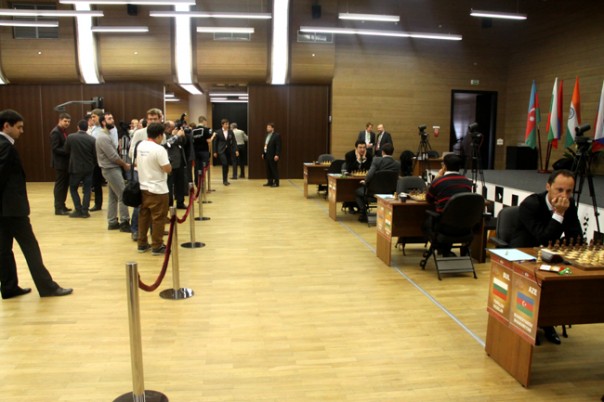 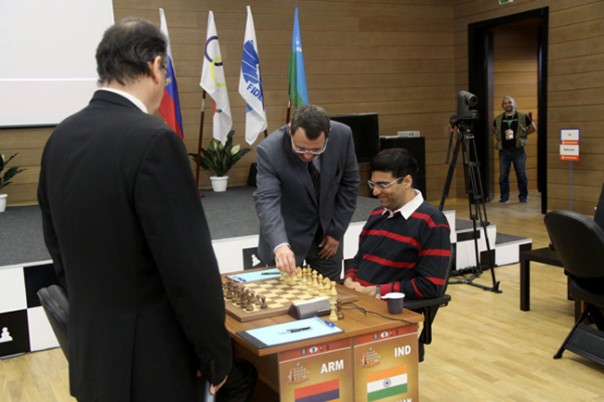 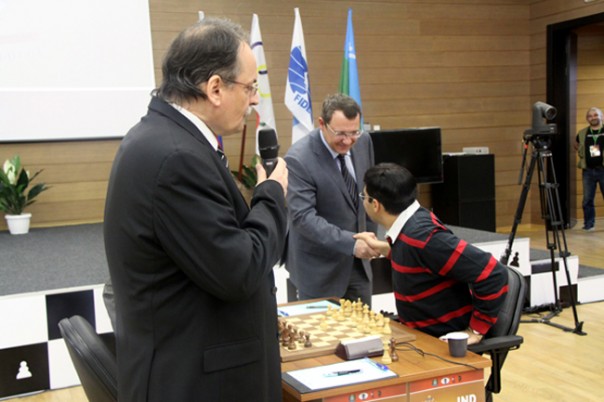 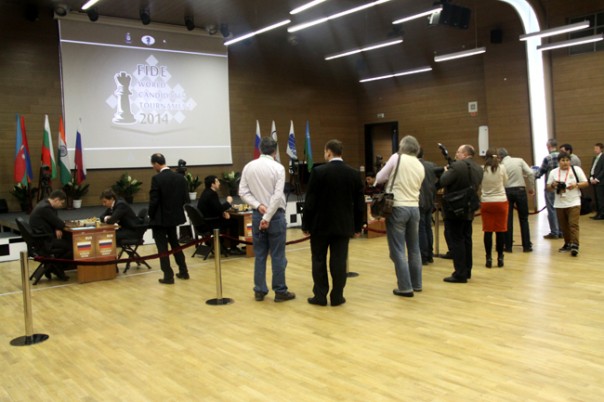 The clock is ticking. 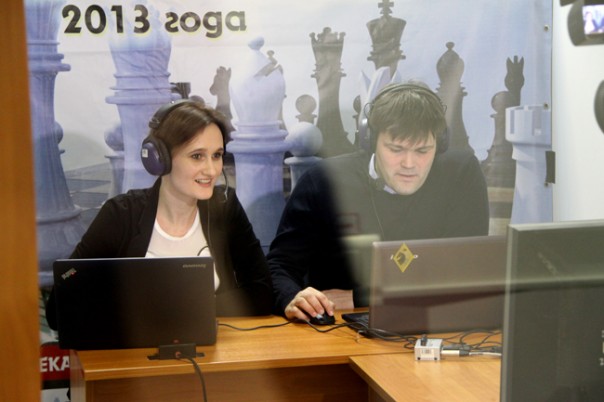 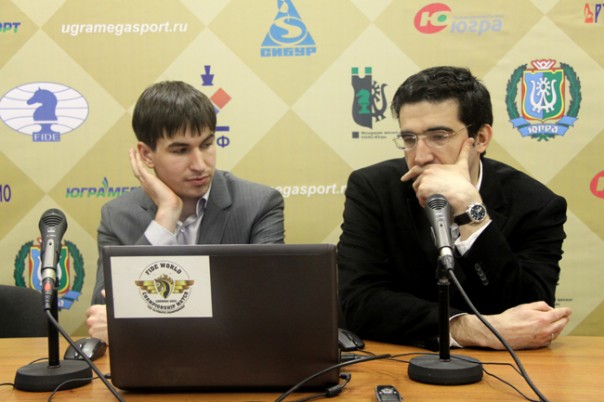 The first guests of the press center – Vladimir Kramnik and Dmitry Andreikin. 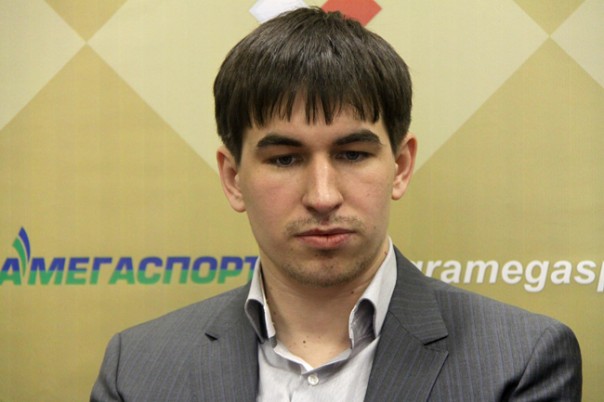 “It’s hard to play against Kramnik. Especially when Vladimir has not been playing for the last four months. It’s difficult to guess his ideas and after 1…Nf6 one can expect everything”, said Dmitry Andreikin. He also mentioned that he has a peculiar philosophy while preparing for Vladimir, but he doesn’t want to reveal it now. 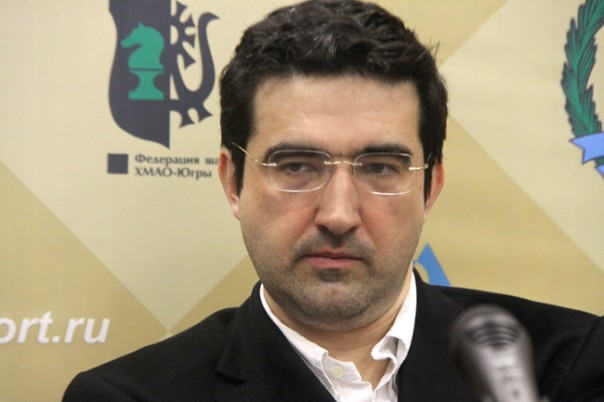 Vladimir noticed that he had already understood the philosophy, but it is more subtle than it may seem, and unfortunately it’s not so easy to fight against it. The ex-world champion also talked about his preparation which had taken place in Ukraine:  «I liked being there very much. First of all, one of my seconds – Zakhar Efimenko – lives there and we have been preparing near his home in Zakarpattia.  Secondly, my roots are from Ukraine because my mother was born in Uzhgorod. So I’m half-Ukranian and half-Russian. That’s why there’ nothing exotic for me in that place. Of course, the events in Ukraine were alarming me and creating a negative background, but the place was quite pleasant. I even had an idea to visit my good friend Vitali Klitschko in Kiev but I’m afraid he didn’t have time for me». 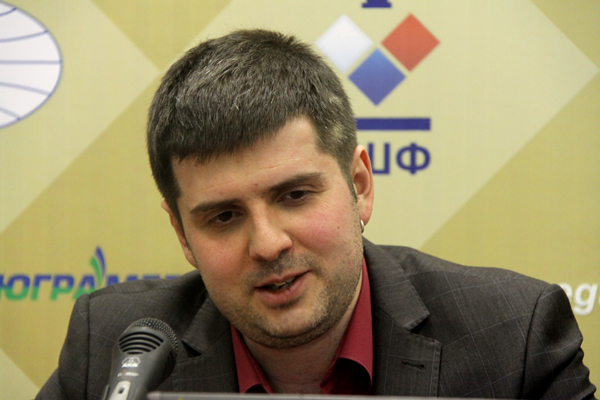 Peter Svilder: «The recent days have been hard – I had hunger for playing”. 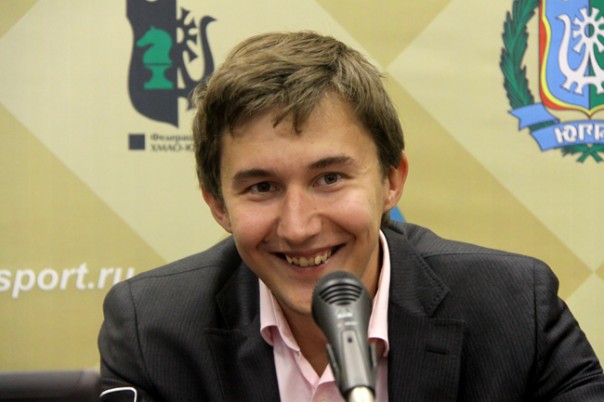 Sergey Karjakin was asked if he had wanted to add a psychologist to his team. He answered that with more people around it would be harder to concentrate on chess. Peter joked: «I’m always advised to invite a psychologist. It seems I look like a person who needs psychological help”. 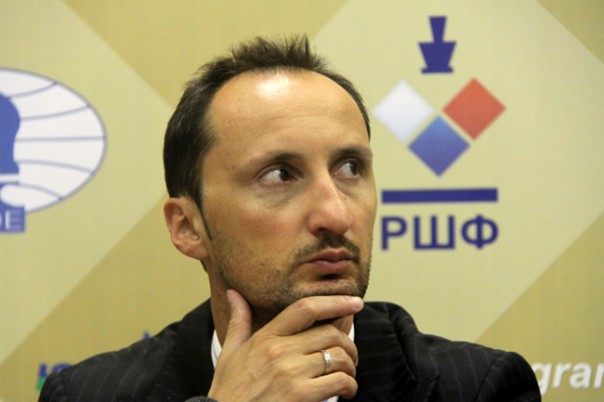 Veselin Topalov was quite concentrated. 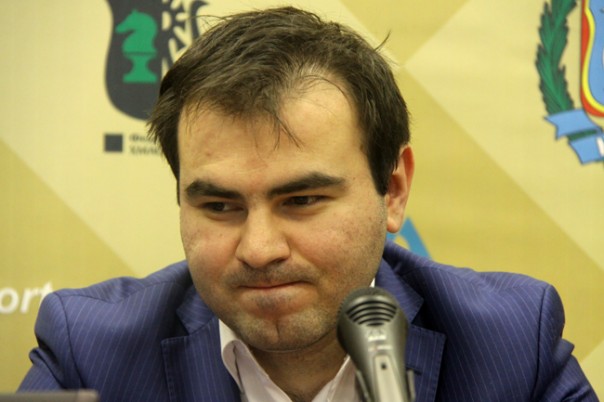 His opponent Shakhriyar Mamedyarov as well. 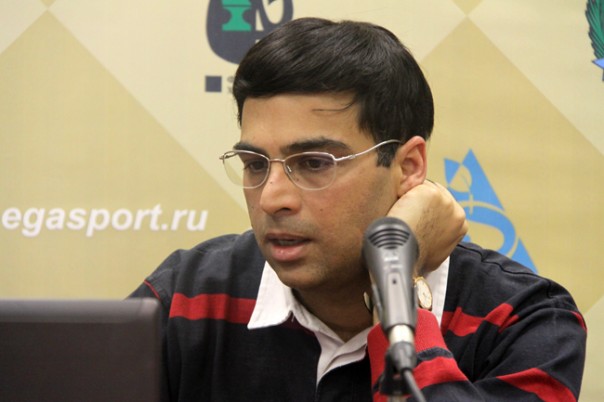 Viswanathan Anand revealed that his second is Sandipan Chanda. 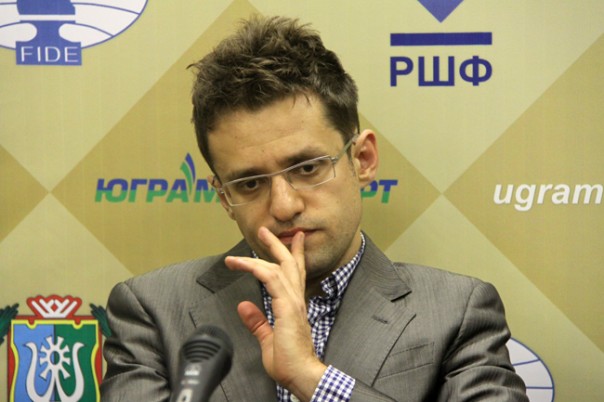 Levon Aronian: «According to statistics and to my feelings I start to play better after I lose one game. Since this event is quite important it’s necessary to start losing earlier (laughing)».

Text and pictures by Eteri Kublashvili