The tournament situation in Khanty-Mansiysk with one round to go was quite interesting. Viswanathan Anand was clear first, and five players tied for 2nd-6th places: Dmitry Andreikin, Levon Aronian, Sergey Karjakin, Vladimir Kramnik, and Shakhriyar Mamedyarov. They were followed, once again in an alphabetical order, by Peter Svidler (-1), and Veselin Topalov (-2). The winner was already determined, but 2nd and 3rd places were still up for grabs. 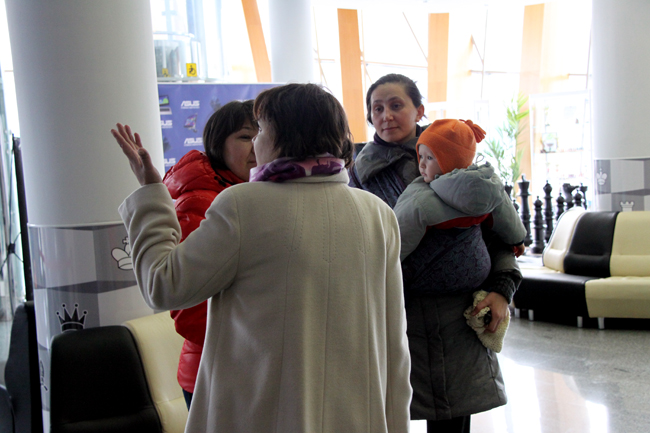 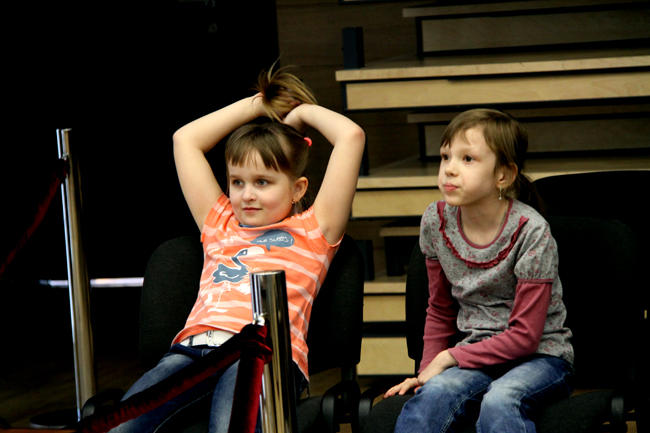 There were many children in the playing hall again. 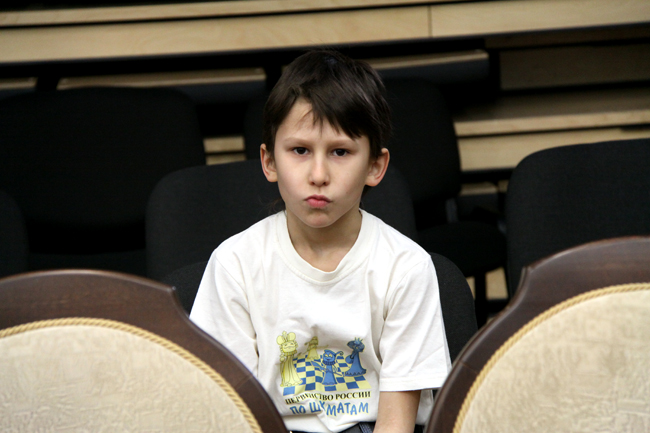 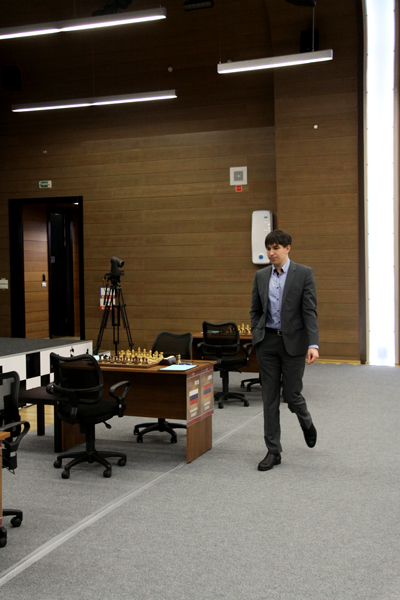 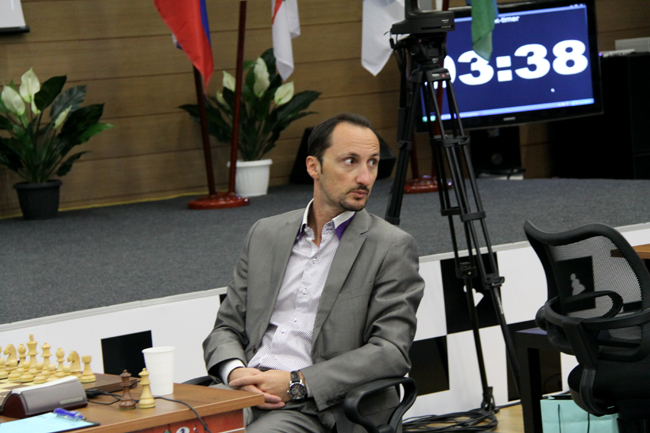 His opponent Veselin Topalov is already there. 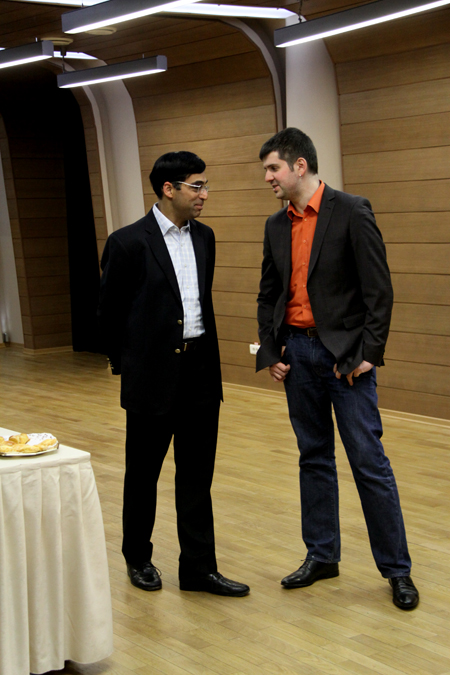 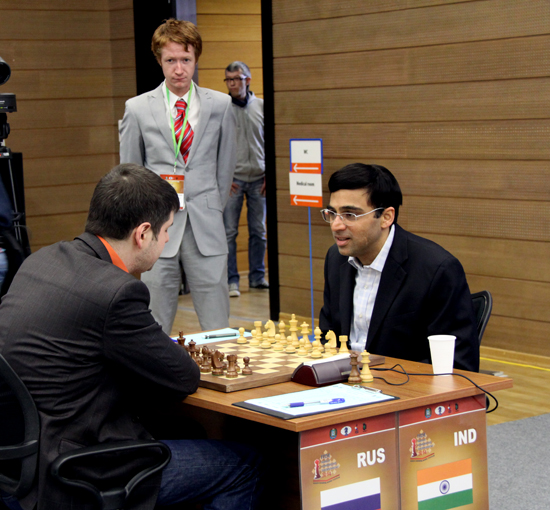 They continued to talk at the table, too. 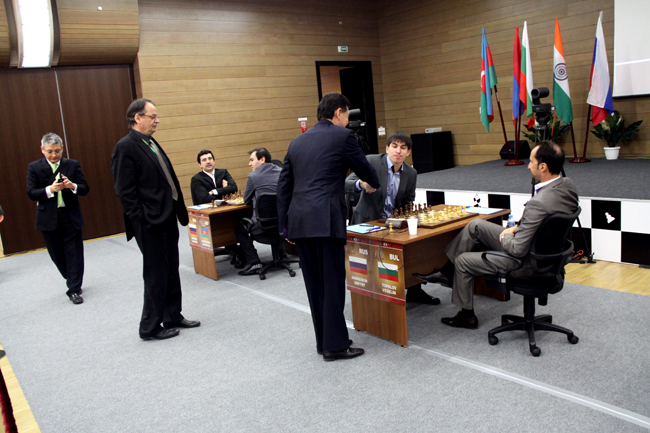 A few minutes before the start of the round came Kirsan Ilyumzhinov. First the FIDE President greeted each player… 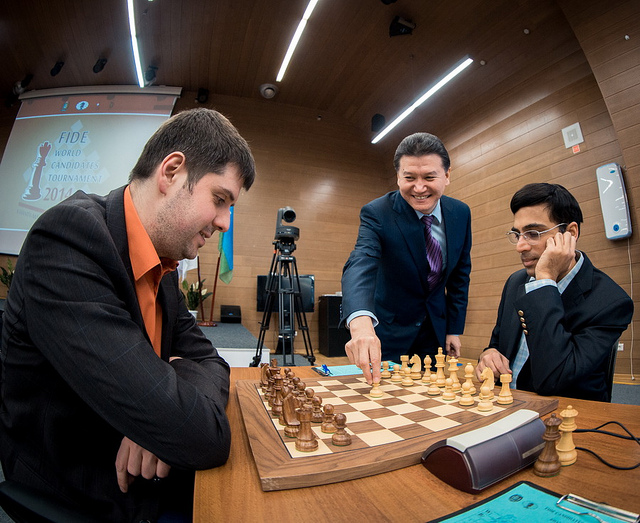 Then he made a symbolic first move in Anand-Svidler. 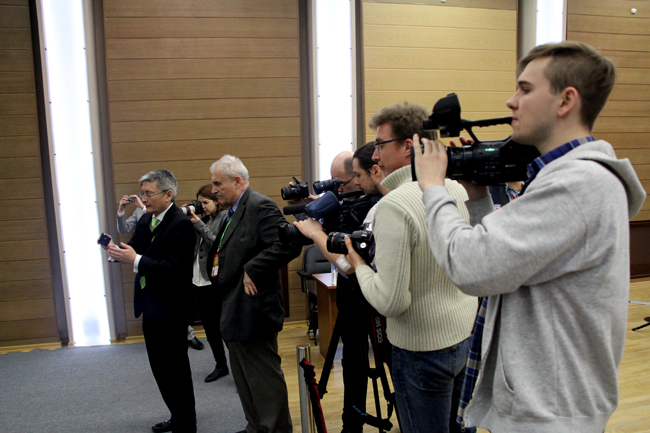 Photographers are looking for chances. 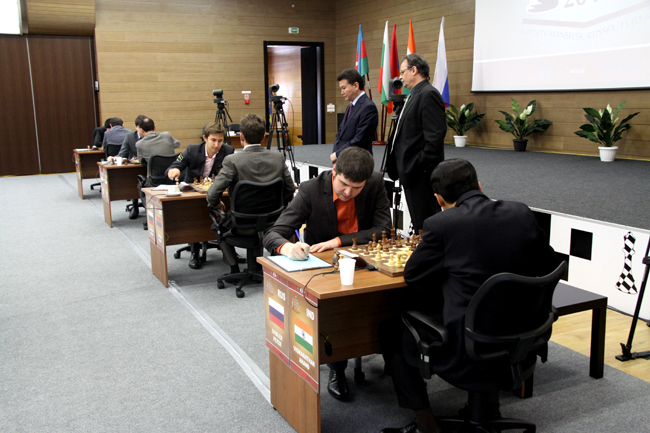 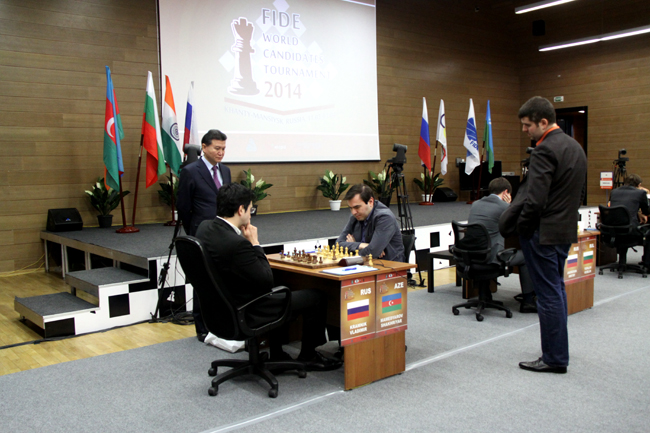 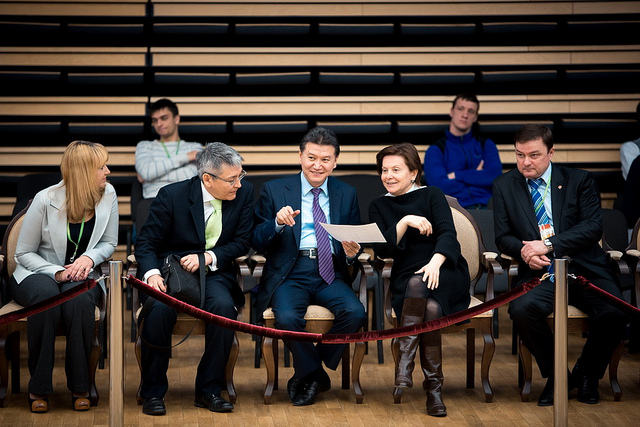 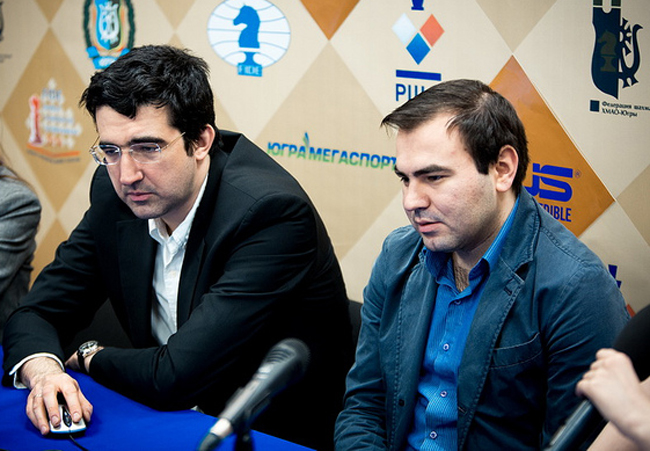 Shakhriyar Mamedyarov: “I expected to fight for the first place before the tournament, but after the third round I realized that it does not exactly work out as planned. I needed to play very risky to get a chance. I am very happy about my play after the third round. I cannot tell if I was lucky or not, I just see things differently. When I win, I think I won without any luck involved, so when I lose, I have to think the same way. There is no good or bad luck. After each loss I tried to play for a win and forget about my blunders”.

Vladimir Kramnik: “I had a very intense year, played a lot after London. Unfortunately, I ran out of nervous energy. Such a long tournament with an extremely strong opposition puts a great toll, and I was unable to stock the necessary resources. Perhaps if the tournament was scheduled in two month, I’d get into a better shape. In London I also got lucky at some point, which is also very important. Actually the difference between a good result and a bad result often depends on one or two key moves”. 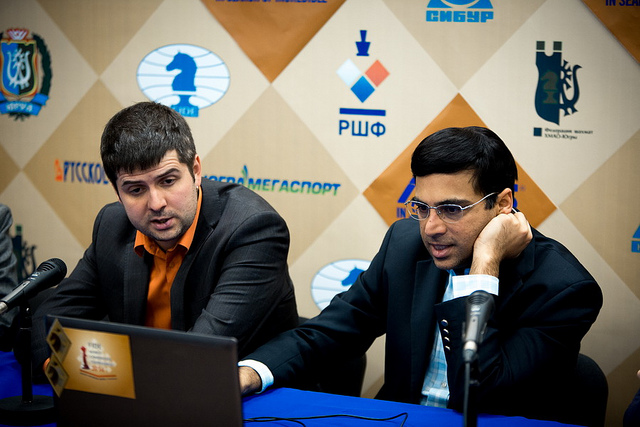 Viswanathan Anand: “I can single out my game with Dmitry Andreikin, in which I failed to find a win. When I came home and turned the computer on, it instantly showed the winning move. If I found and played it at the board, I would definitely include this game in my game collection. The game with Topalov also deserves to be mentioned, because there was such a beautiful zugzwang with a bishop and a queen. And, of course, my first victory against Levon as White. Actually, I like all my wins”.

Peter Svidler: “Right now the feeling of missed opportunities prevails. In the first half of the tournament I had good chances in nearly every game, but made too many unforced errors. I would like to thank my team – Maxim, who was here with me, and Nikita, who worked from home. We worked a lot, and many positions that occurred in my games were prepared at home. I think I played quite well in the first half, but, once again, my mistakes made this tournament somewhat disappointing”. 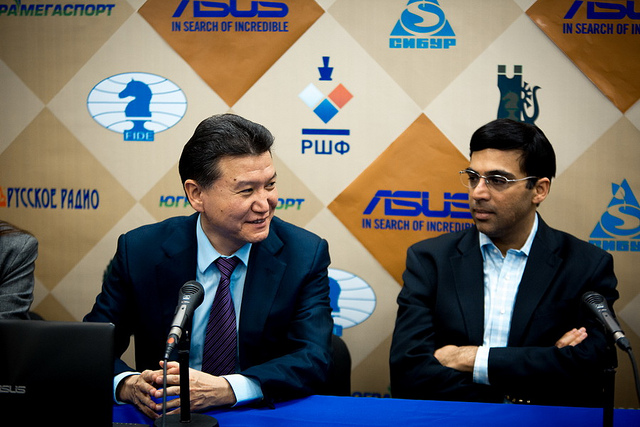 Then there was a joint press-conference of the FIDE President Kirsan Ilyumzhinov and the winner of the candidates tournament Viswanathan Anand. 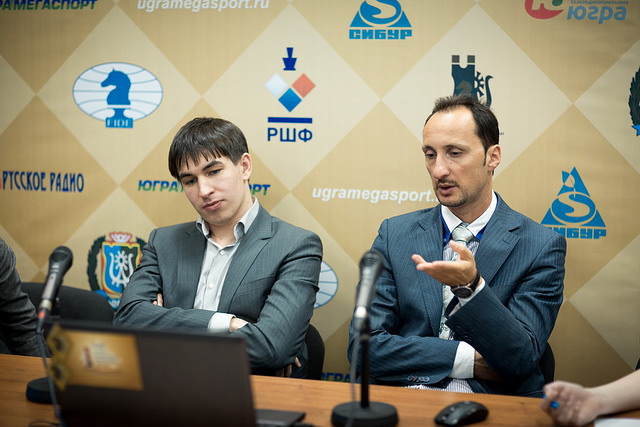 Dmitry Andreikin: “I think I played very bad, but my result is mostly positive”.

Veselin Topalov: “Generally I was prepared very well, but played really bad. My opening positions were good, but then I made mistakes. If I wanted to finish at 50%, I think I could do that, but the whole point of this tournament is different”. 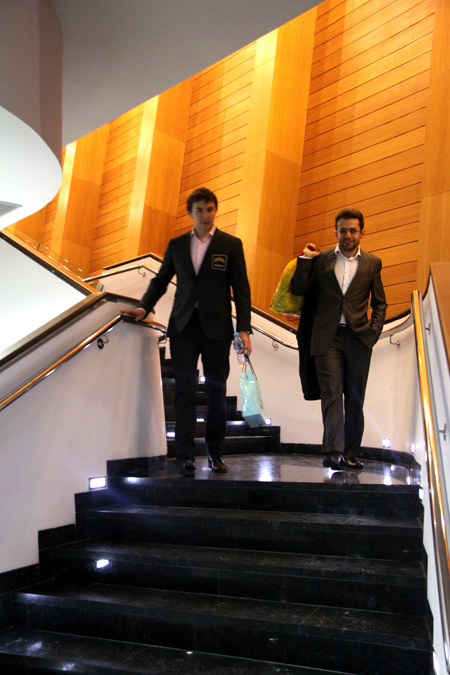 The game between Sergey Karjakin and Levon Aronian continued for exactly seven hours, which is a record for this tournament, and ended in favor of the Russian grandmaster. Thus Sergey Karjakin finished second. The joint 3rd–5th places were taken by Vladimir Kramnik, Shakhriyar Mamedyarov, and Dmitry Andreikin. According to the tie-break, Vladimir Kramnik was awarded the third place. Levon Aronian and Peter Svidler finished 6th–7th, Veselin Topalov finished 8th.