Dmitry Andreikin mentioned at the press-conference: “It is not easy to prepare for Kramnik”. Illustrating his point, one cannot help noticing that all reference games in this variation (and our game was essentially decided in the opening) are co-authored by Vladimir Borisovich.

1.d4 Nf6 2.c4 e6 3.Nc3 Bb4 4.Qc2 0–0 5.a3 Bxc3+ 6.Qxc3 d5. Statistically the official reaction to the Alekhine Variation (4.Qс2) – almost all recent games between 2750+ players reach this position. Black intends to equalize with comfort and reserves the right to seize the initiative, if White gets carried away. 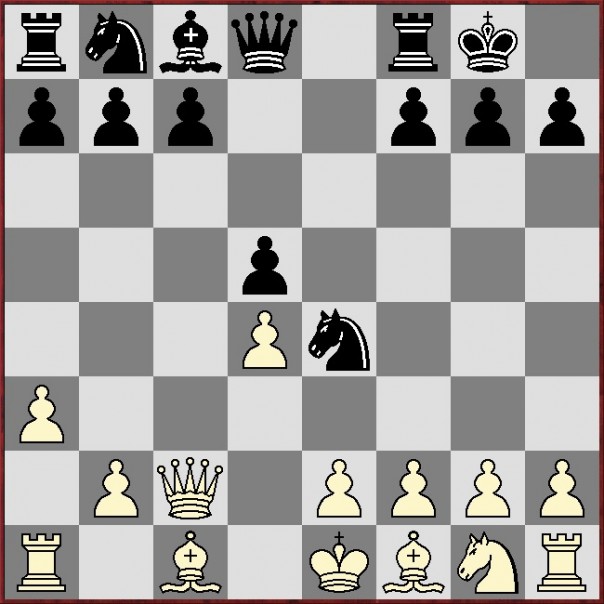 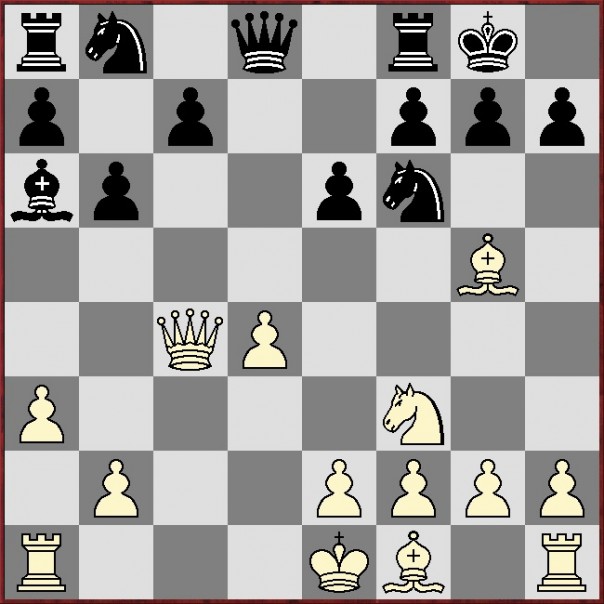 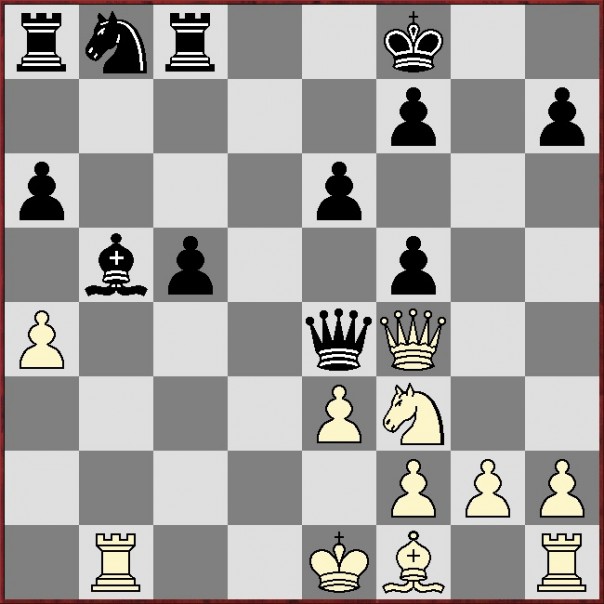 22.Qxe4. This is a real novelty, which is, however, an unrivaled first line of most chess engines and therefore cannot have any surprise value. 22.Qh6+ transposed to Mamedyarov-Kramnik. 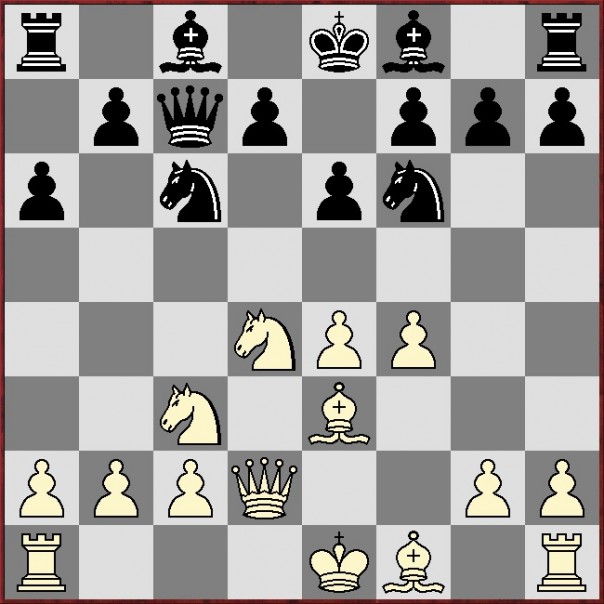 9.e5 Ng4. As Peter Svidler mentioned with his usual sarcasm: “I did remember this was my main line, but not much else”. I can say the position after 8.f4 is extremely complicated and original, and during the express-analysis one cannot even hope to discover the truth about it. 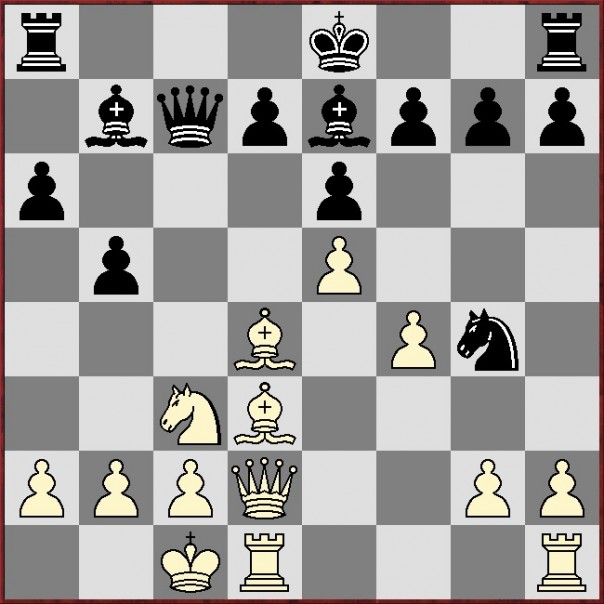 14.h3 Nh6 15.Rhg1 0–0 16.Qe3. In this position Black has no promising plans – he has to defend stoically on the kingside by g6, and hardly has any real chances of creating his own play on the queenside. Any queenside offense, if it fails, leaves Black with a ton of weaknesses and a hopeless knight on h6. 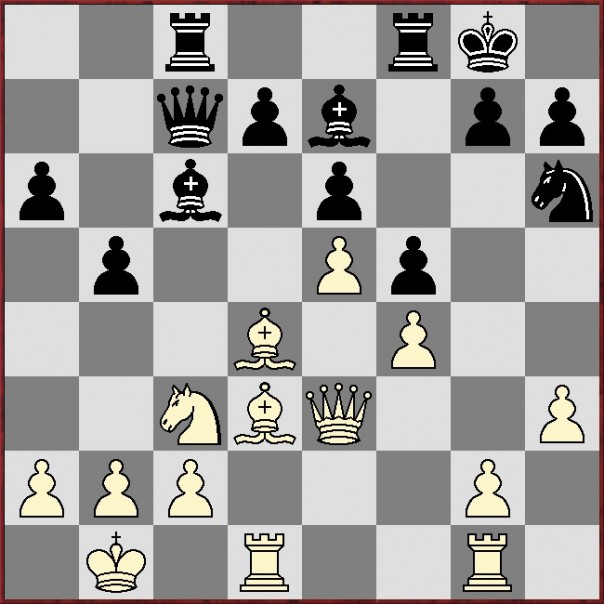 18.Ne2?! An inaccuracy that allows Black to rearrange his pieces and create counterchances. Apparently, the straightforward 18.g4! is much stronger, intending to meet 18…g6 with 19.Rd2!, vacating the d1-square for the e3-knight. Svidler mentioned a similar idea at the press-conference, suggesting 19.Rdf1!? In this case after 19…b4 20.Nd1 Bb5 the knight goes to another central square – 21.Nf2 Bxd3 22.Nxd3 followed by b3 and Nb2-c4. It is hard for Black to match the opponent in the center and on the queenside due to his cut off knight.

20…Qb7. Renewing a positional threat of trading the light-squared bishops by Bc4. 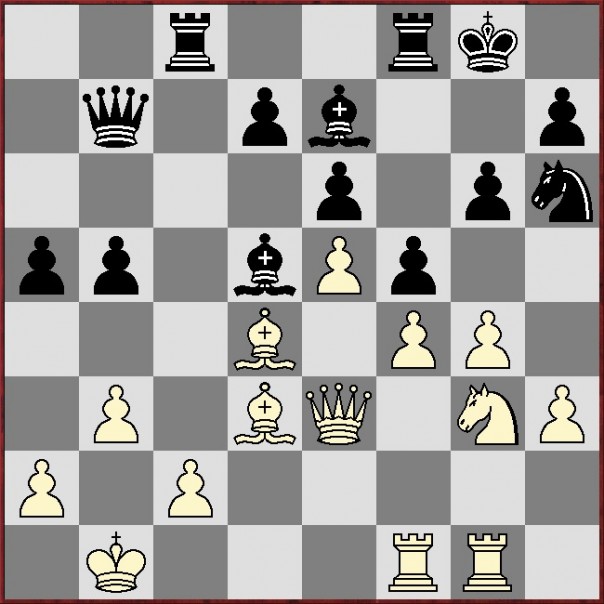 24.Bd3. Black is out of danger after 24.Bxd5 Qxd5, as he easily holds on f5 and in future can create some counterplay on the a-file.

1.d4 d5 2.c4 c6 3.Nf3 Nf6 4.Nbd2 g6 5.e3 Bg7 6.Bd3. If I understood Shakh correctly at the press-conference, this move is lapsus manus. Shakhriyar employed this variation in three “live” blitz games in 2013 (and probably in hundreds games online), so Veselin could definitely anticipate it. However, today Mamedyarov planned to go for 6.b4, but mixed up the move order. 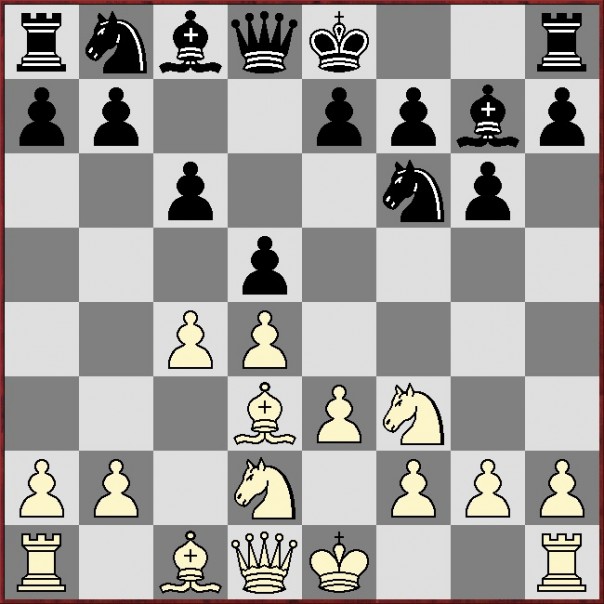 6…c5! The most concrete reaction that offers immediate equality. Surprisingly, this typical move appears to be a novelty – at least I failed to find it in a human database. 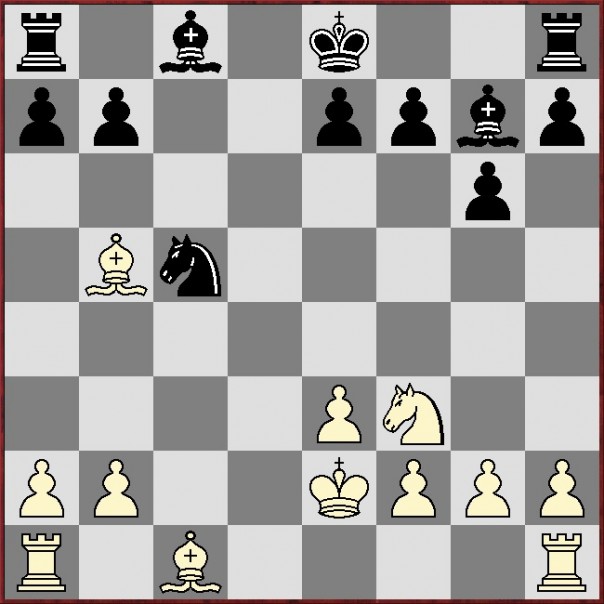 13…Bd7. 13…Nd7!? is interesting, intending to keep the light-squared bishop and try to utilize awkward positioning of the enemy king. After 14.Rd1 a6 15.Ba4 b5 16.Bb3 e6 Black is perfectly fine and might even think about seizing the initiative.

14.Bxd7+ Kxd7. Both grandmasters said it was safer to take with a knight, but there is nothing wrong with this move. 14…Nxd7 15.Bd2 is a complete equality.

15.Rd1+ Ke8 16.Rb1 Rc8 17.Bd2 Ne4. Symmetrical structure makes the rest of the game almost risk-free for both sides, however, neither can afford recklessness. 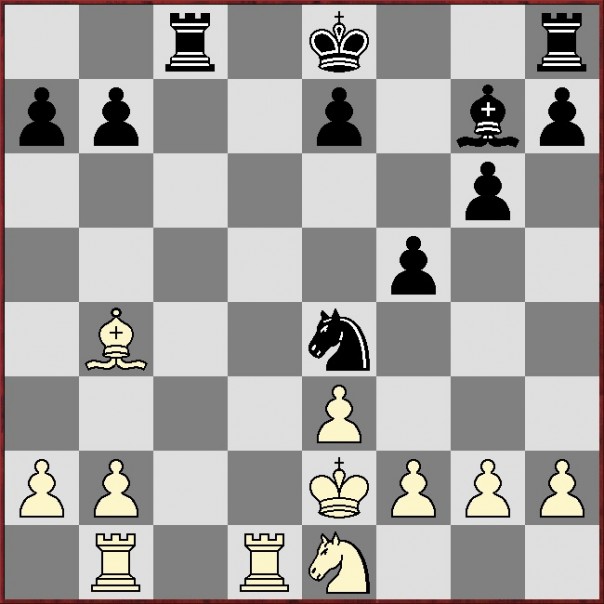 19…a5. At the press-conference Veselin blamed this move (quite possibly, not the best one), saying that he blundered in the variation below. Actually the text is not a serious mistake at all. 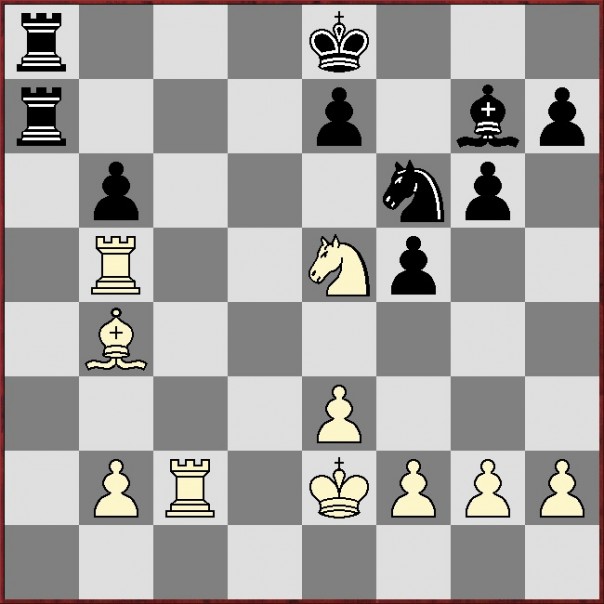 33…Rd5! Another precise move. Due to Rxa3 threat White must give a perpetual.

The only decisive game of the round looks very one-sided. It reminded us of the best years of Vishy’s career. 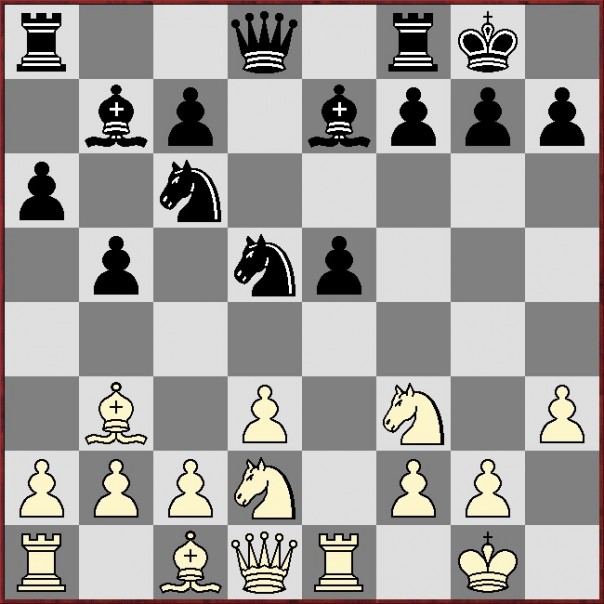 11…Qd7. According to my database, this move is a novelty. Black insists on sacrificing a pawn and simply develops his pieces.

One viable alternative is 16…Qf5. It contains no threats, but an active queen is often useful both objectively and psychologically. After 17.d4 Nd5 18.Nh4 Qf6 19.Qf3 Qd8!? I don’t see how White can win material. Also 16…Nd5!? is interesting: White would prefer to keep the bishop, but after 17.Bd2 c5! Black piece activity at least compensates a missing pawn. 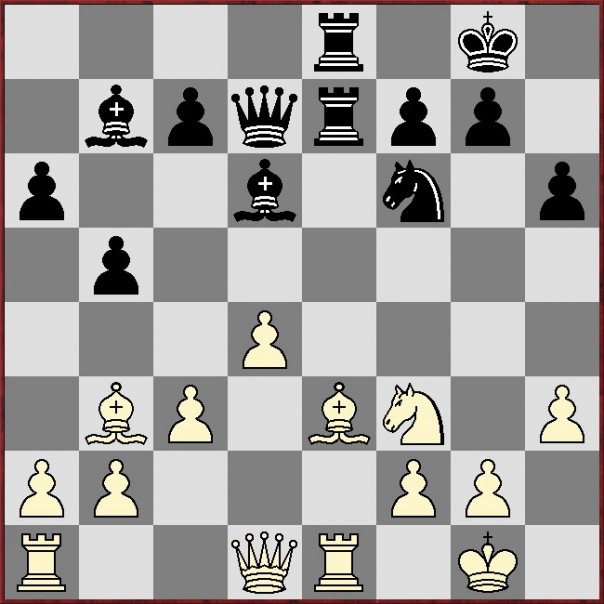 19.Ne5! The game-winning move! Instead of trying to hold an extra pawn and defend passively (as in 19.a4 Nd5 20.Bd2 Rxe1+ 21.Nxe1 c5!?) White trades queens, returns a pawn, but gains the mighty bishop pair and enjoys complete safety. Also he succeeds in lulling his opponent, as Levon admitted at the press-conference… The Armenian clearly underestimated dangers of the coming endgame. 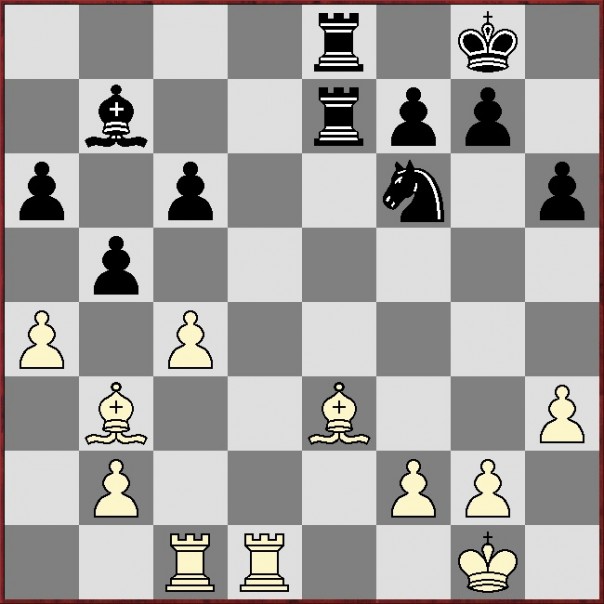 26.Bxc4 Nd5 27.Bc5 Re4 28.f3 R4e5 29.Kf2. Emphatically austere way of increasing the pressure! White does not want to determine his queenside structure yet, and just makes reasonable moves, which is exactly what Black is lacking.

29…Bc8 30.Bf1. Vacating the c-file and hiding the long-range bishop as safely as possible. White also threatens to win a pawn with Bd6. 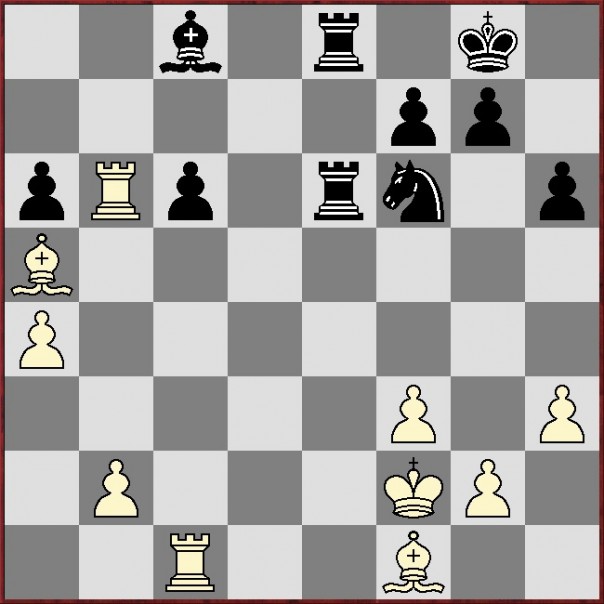 The c6-pawn is doomed, so Levon tries tactics.

38…Nxb6 39.Bd4 Nxa4. The knight is trapped, but White has to solve a few tactical puzzles to finally catch it. 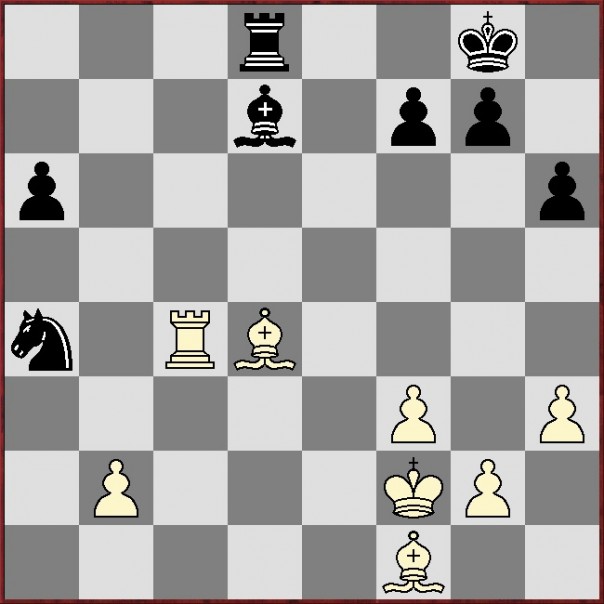 42.b3! Finally! Black ran out of tactical options, and the knight cannot be saved.