On the day off the Khanty-Mansiysk hosts organized a very interesting excursion for commentators, arbiters, and press-center staff.  Chess players did not attend it, so we don’t know how they spent their free time, but the 4th round demonstrated that the grandmasters successfully recharged their batteries and prepared for the action. Today Russian and foreign participants finally started facing each other. 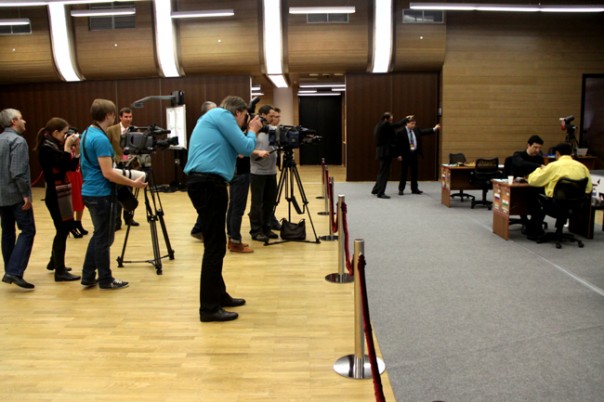 Vladimir Kramnik and Vishy Anand arrived almost simultaneously and immediately drew the attention of the media. All games between the World Chess Championship contenders (Kramnik and Anand played their match in Bonn in 2008) are highly anticipated by chess fans and experts. The ex-World champions already played 81 classical game against each other, including this one. 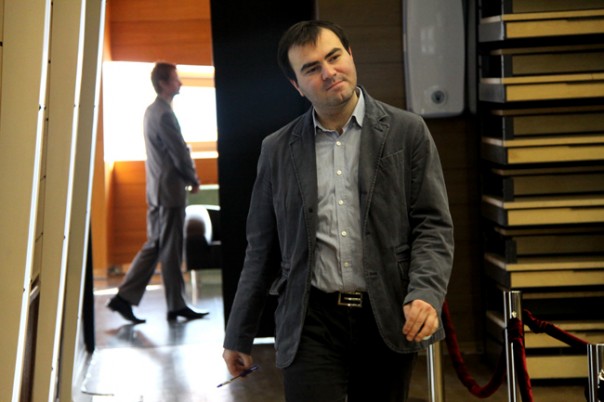 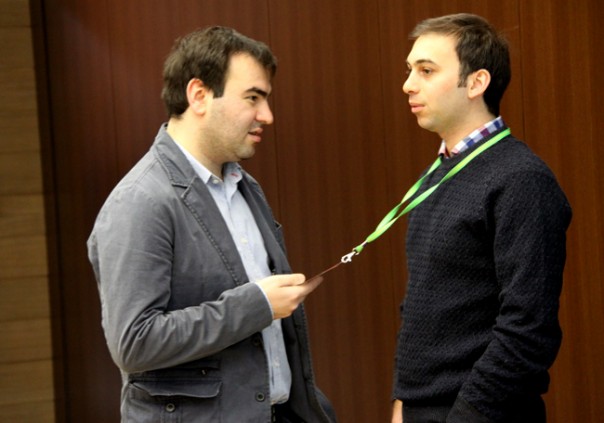 Rustam Najafov, manager and friend of Shakhriyar, helps the player to improve his mood.

New faces at the Ugra Chess Academy! Silvio Danailov, ECU President and Veselin Topalov’s manager, arrived to Khanty-Mansiysk to support his compatriot. Before the start of the clocks Silvio joined a conversation with the Azerbaijani team. 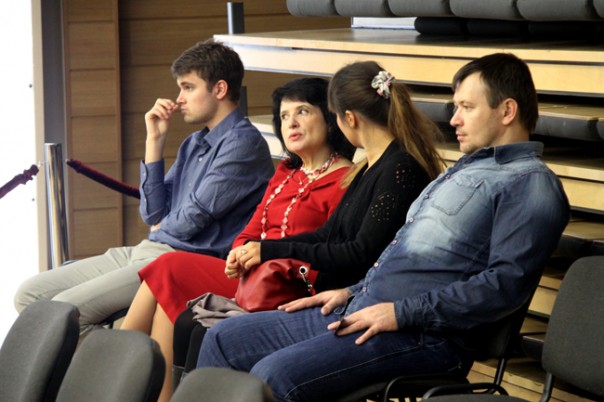 Peter Svidler now enjoys company of his second Maxim Matlakov, who just finished playing at the European Championship. Marina Makarycheva of NTV Plus also arrived in Khanty-Mansiysk with her crew. 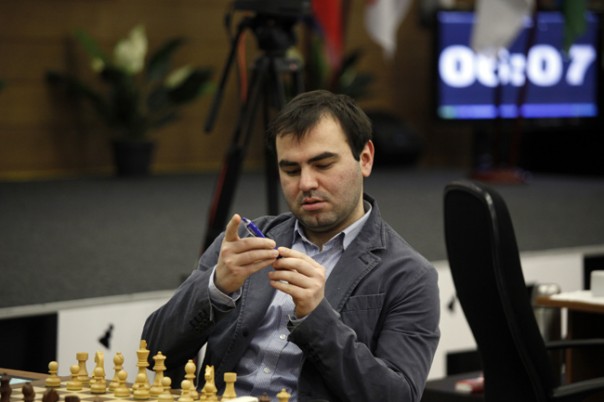 Apparently the organizers provided the players new pens. Otherwise it is hard to explain sudden interest of Shakhriyar Mamedyarov… 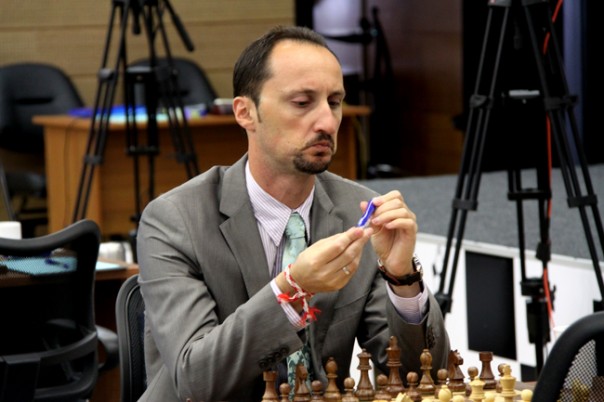 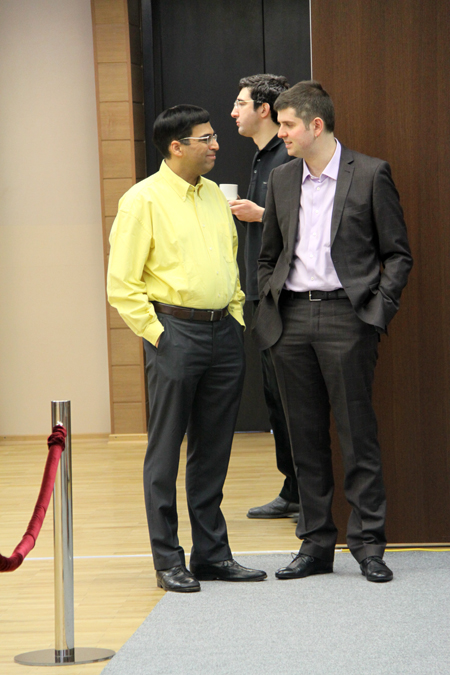 One can only wonder whether Vishy Anand discusses real politics with Peter Svidler. 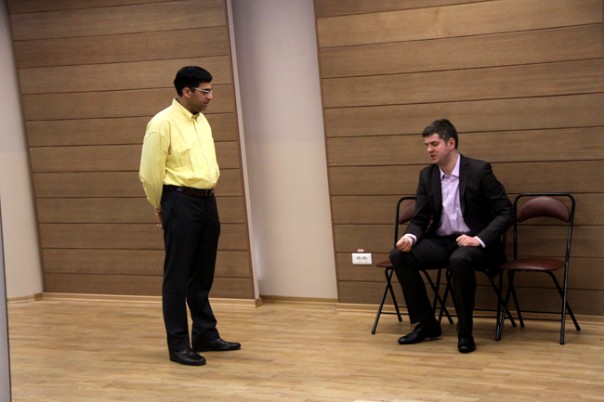 Vladimir Kramnik is walking nearby. 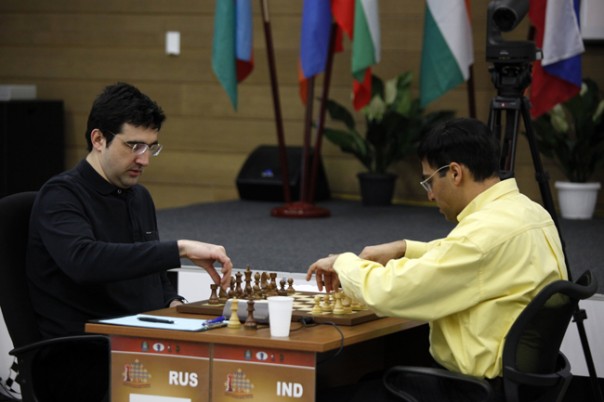 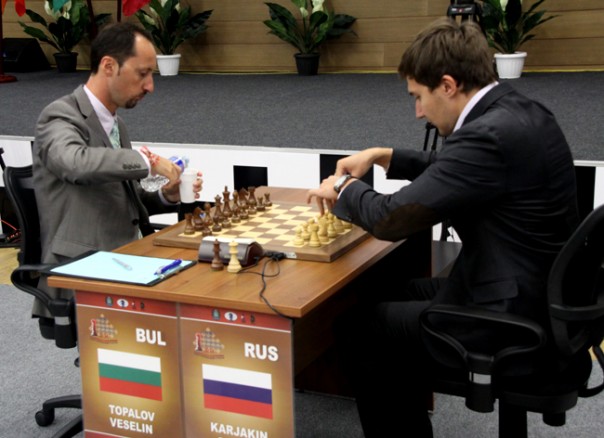 Veselin Topalov and Sergey Karjakin getting ready to fight.

Topalov-Kramnik, soon in theaters near you! 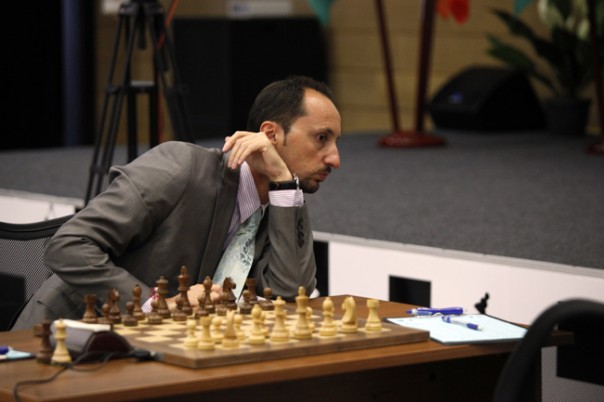 How’s the situation in Aronian-Svidler? 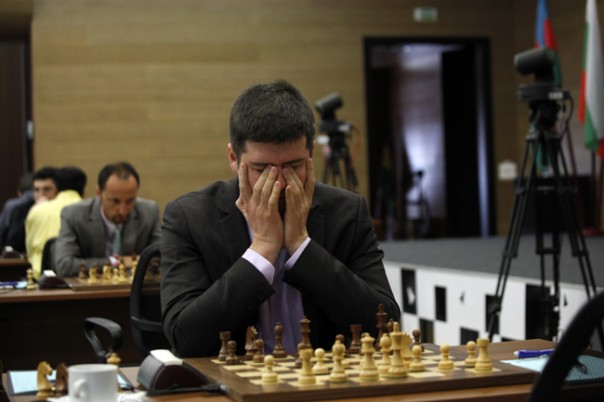 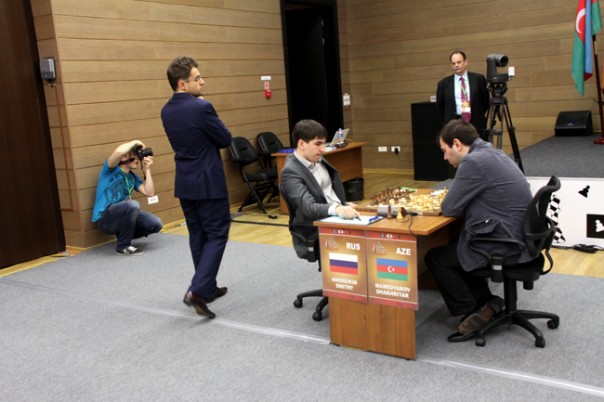 The bypasser Levon Aronian is distracted by Mamedyarov-Andreikin game. 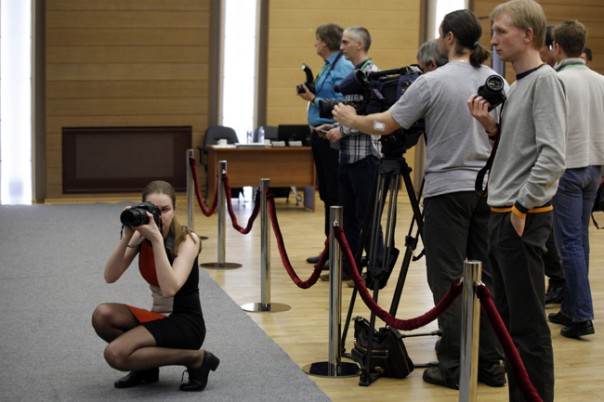 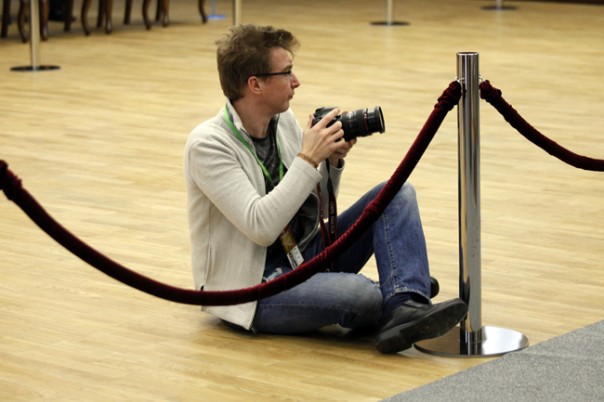 Evgeny Atarov is looking for new horizons on the floor. 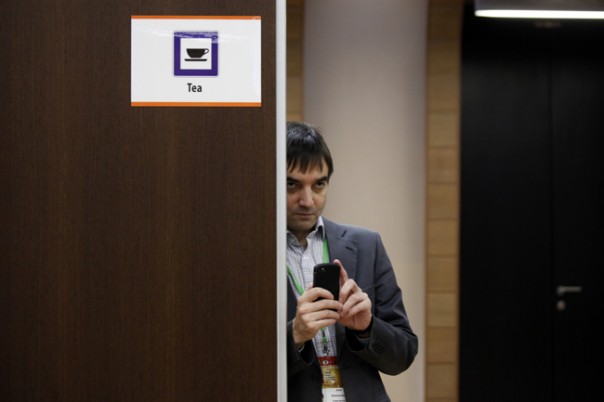 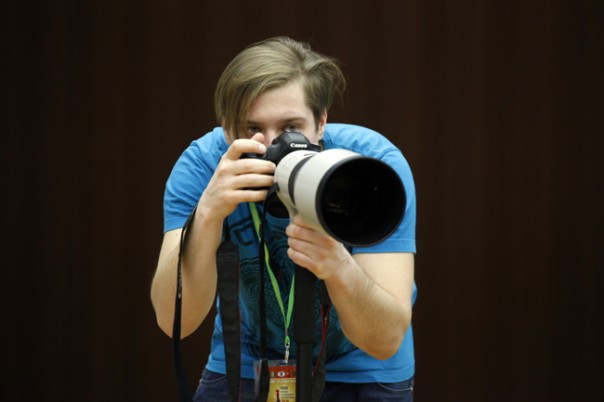 With such camera one can hunt not only chess players, but also hockey players and biathletes. 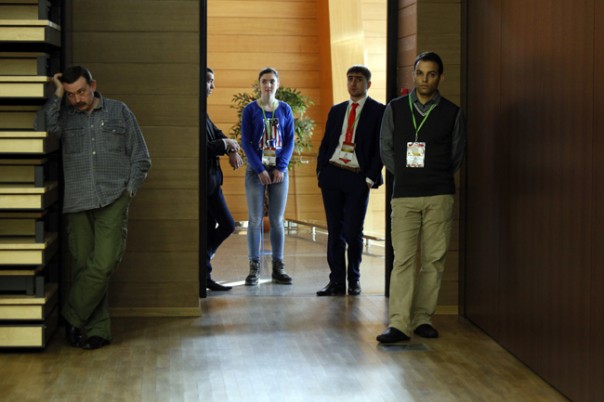 Some prefer keeping the distance. 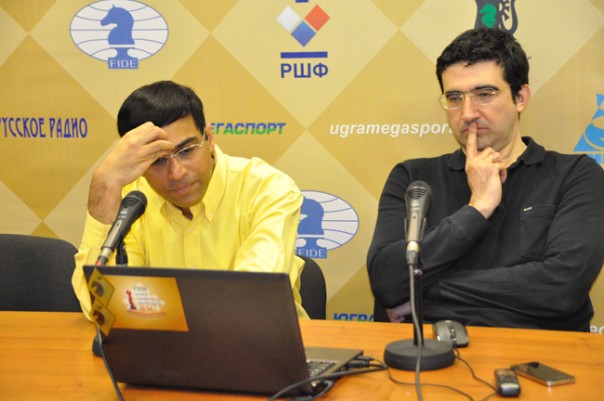 FIDE Press Officer Anastasia Karlovich asked: “You both were World Champions. If you played against your younger version who just won the title, who would win?”

Vladimir Kramnik: “I think that would be a draw. I would offer me a draw, and accept it”.

Another question followed: “But do you understand chess better now?”

Vishy Anand: “The answer is actually very simple: the more you study chess, the less confident you are”.

Vladimir Kramnik: “I have a theory that may sound a bit strange: understanding chess too deeply is not a good thing, and is certainly counterproductive. You just need to understand it a touch better than your opponent. Of course, better understanding does not guarantee success, because there are many other important factors. I noticed when you begin to understand a certain position really deep, your results decline. This is all very complicated matter and I try not to overthink it”. 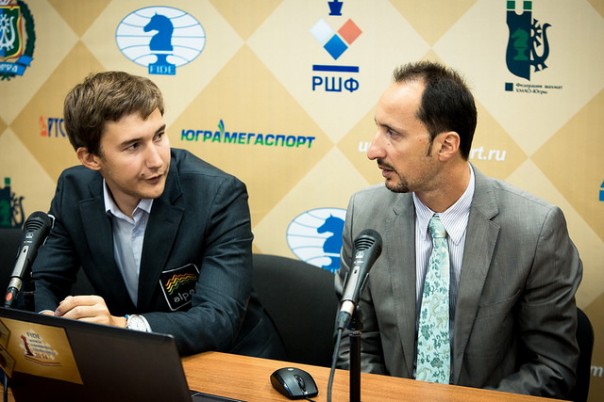 Do you use Magnus Carlsen’s app for iPhone?

Sergey Karjakin: “My seconds used it, I haven’t yet”.

Veselin Topalov: “I heard about it but never played”. 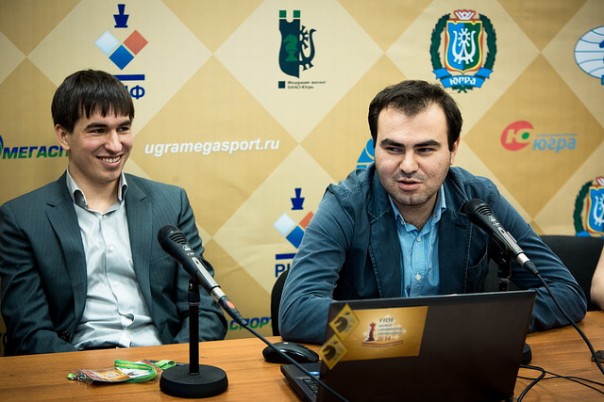 Shakhriyar Mamedyarov: “I knew in advance it would be a very good tournament. I am rated 7th out of 8 players, which means the tournament is very strong. However, it wouldn’t make sense to prepare and play if I didn’t believe I can win. I worked a lot and I want to fight for the first place. If you stop trying, later you’ll never forgive it – you have to fight! And I am doing everything I can. My country, my sponsors arranged everything for me, and I still believe I have my chances. But regardless of the final result I’ll be in a good mood in the end”.

Dmitry Andreikin confirmed that he became a father last month. “It definitely affected my preparation. Daughters need attention, you know! But it only made my game stronger, because she gives me positive emotions, and this is what every chess player needs. Every evening we talk a lot on Skype”. 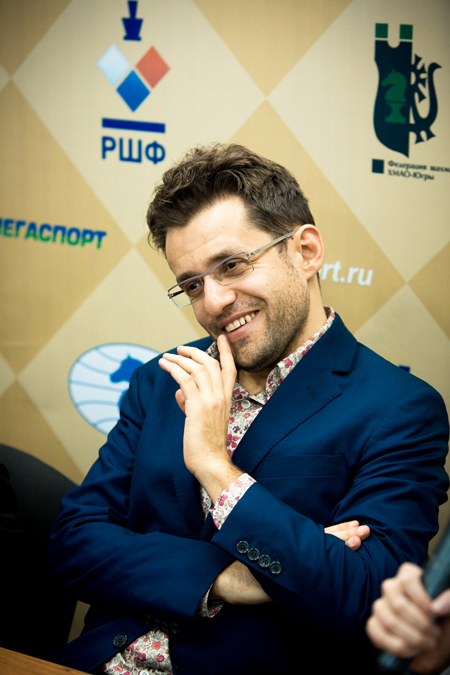 Levon Aronian: “We had a principled theoretical duel. Usually it’s not a good thing when you have a pawn for a piece, and playing a complicated position against a strong opponent can be tricky. However, I found many good moves and created serious problems for my opponent”. 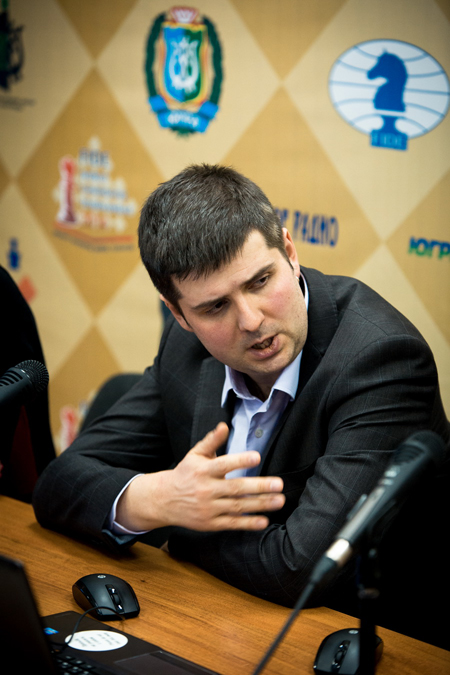 Peter Svidler said he rejected returning the piece because it would force a draw, while he wanted to make better use of his extra material. “Cowards don’t do hockey! – Svidler used a famous Soviet proverb. – Unfortunately, sometimes I pick wrong spots for large-scale battles”.

After four rounds the tournament is led by Vishy Anand with 3 points. Half a point behind are Vladimir Kramnik and Levon Aronian, who surpassed Peter Svidler in the rankings.