The key story of the 6th round of the candidates tournament was the encounter between the World Chess Championship 2006 rivals Vladimir Kramnik and Veselin Topalov. After the notorious “Tioletgate” they don’t shake hands with each other, and, naturally, every game between them (the latest classical control game occurred in 2008) draws a lot of attention. The most popular question prior to the game was about their handshake. 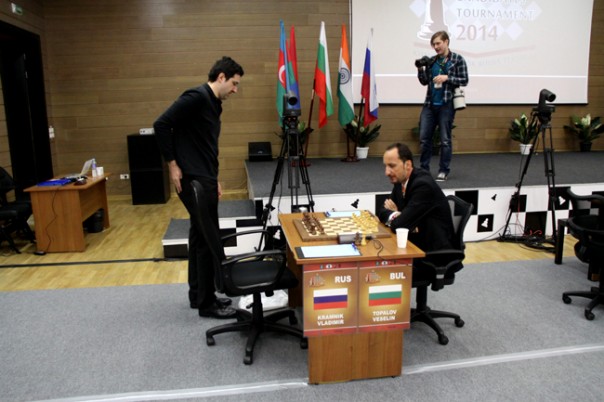 Kramnik came to the table. 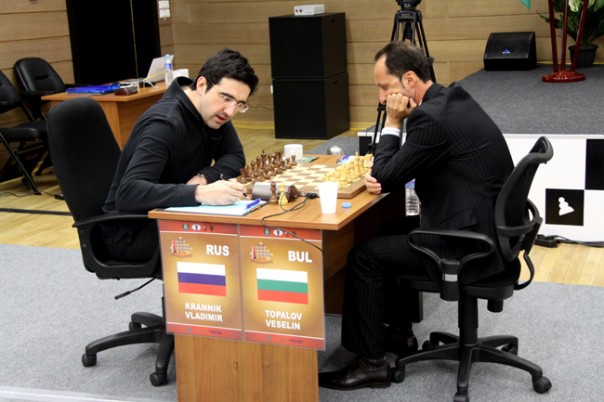 And there was no handshake. 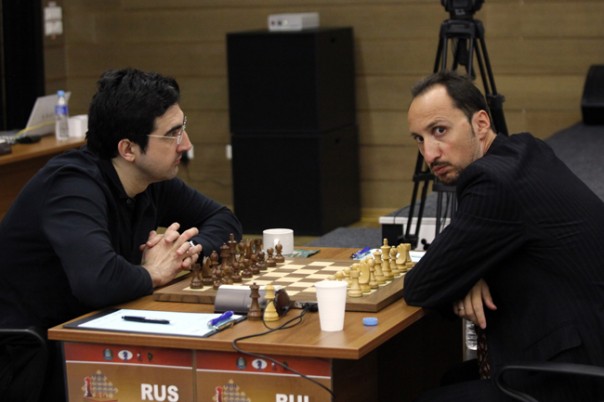 The tension was electrifying. One could sense how focused were both players. 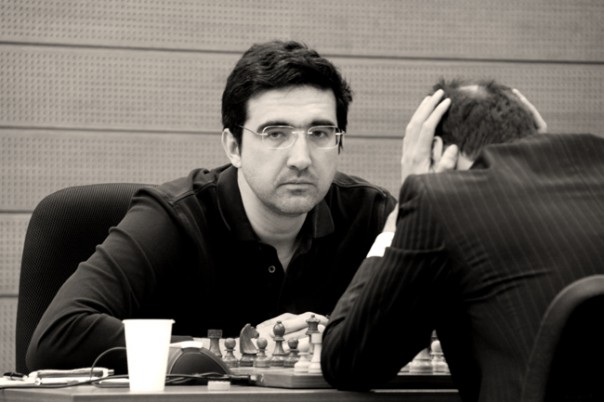 Kramnik prepares to defend as Black. 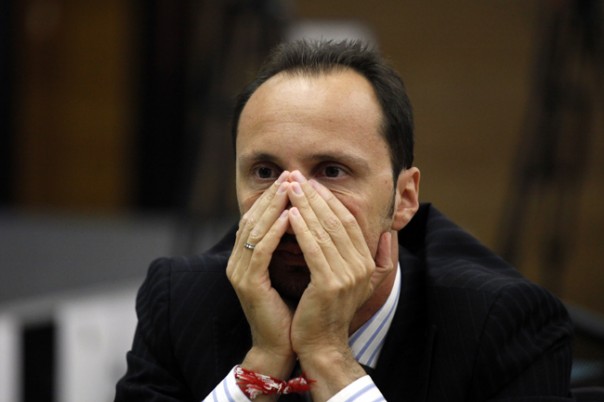 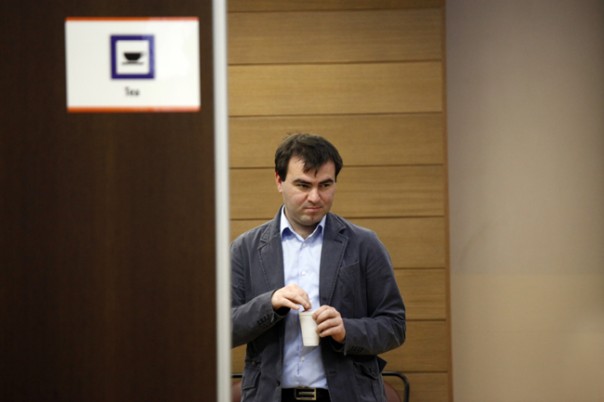 Shakhriyar Mamedyarov observes together with us. 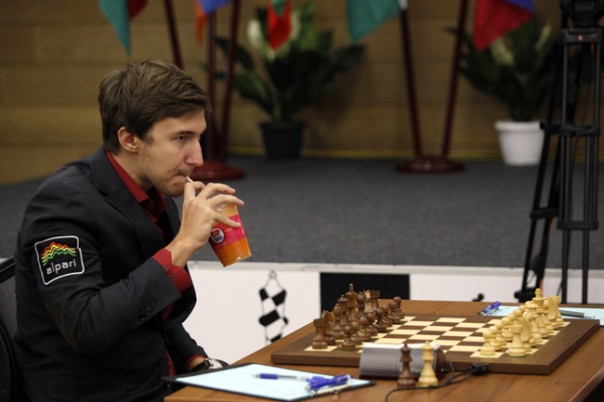 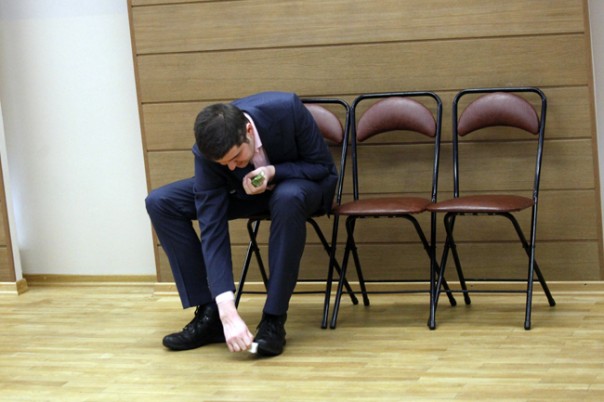 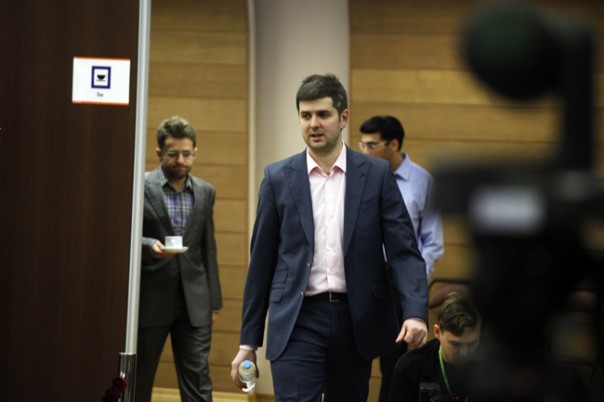 Playing chess is always a pleasure! 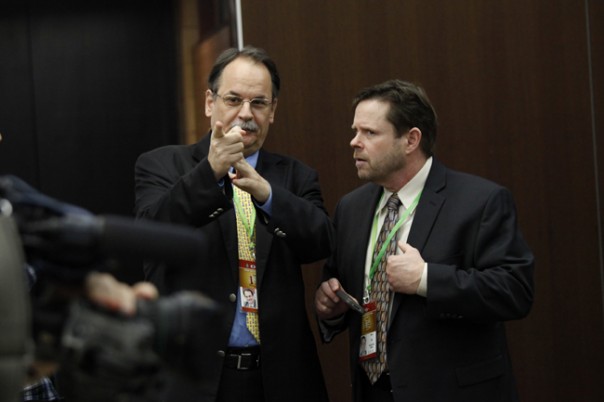 The Chief Arbiter Takis Nikolopoulos and his assistant Hal Bond. 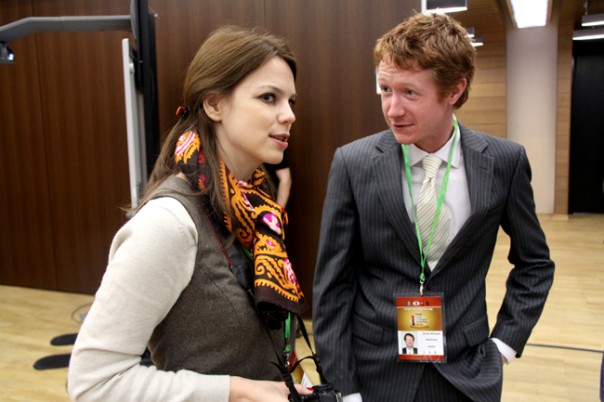 FIDE Press Officer Anastasia Karlovich and another assistant of the Chief Arbiter. 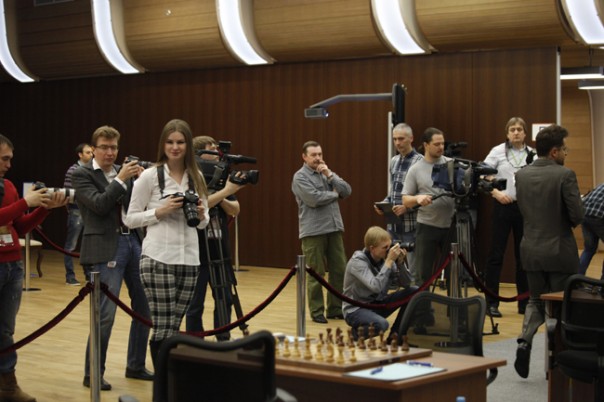 It is easy to guess which game is the most exciting for the media. 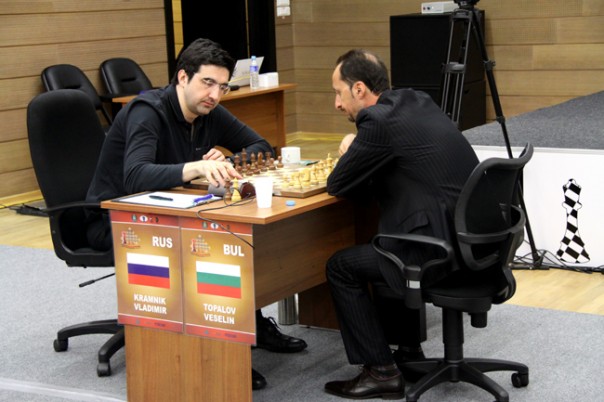 So there is no handshake after all. Vladimir Kramnik starts the clock. 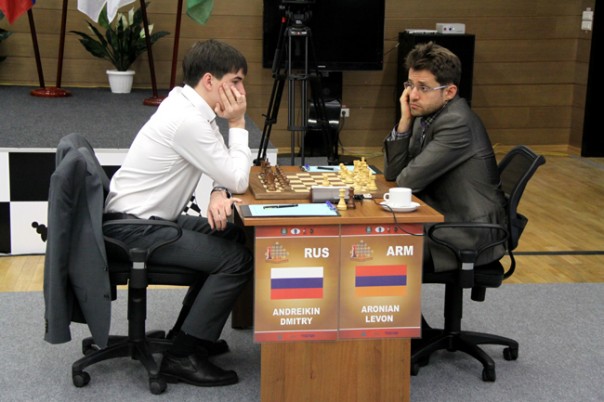 Levon Aronian is curious too. 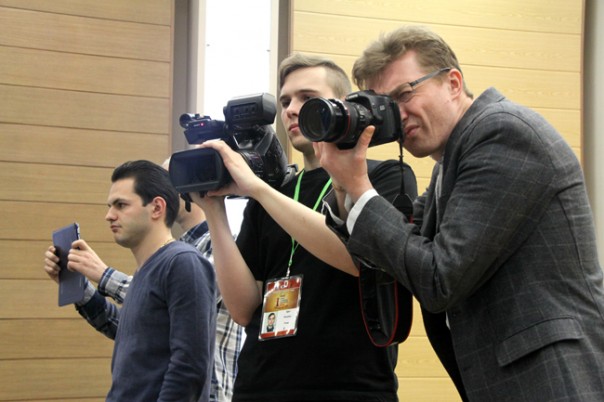 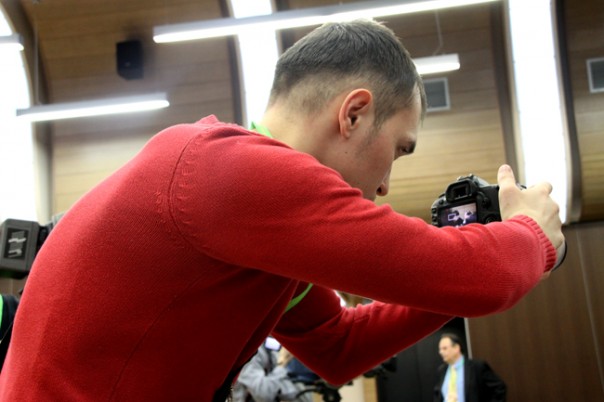 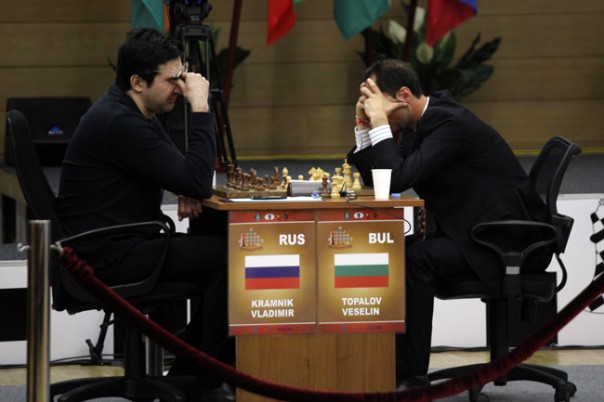 The players started quickly, and a sharp position arose quite soon. 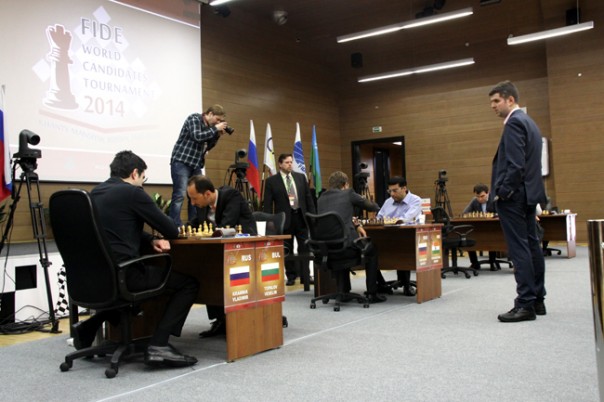 Other participants also showed their interest in the main game of the day. Peter Svidler came first. 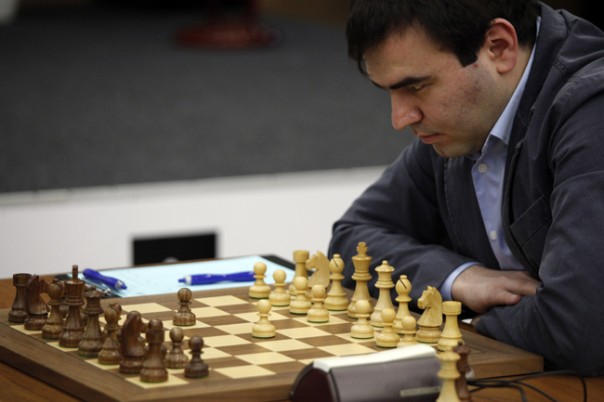 His opponent Shakhriyar Mamedyarov took his time already on the second move. Clearly, Peter managed to surprise him. 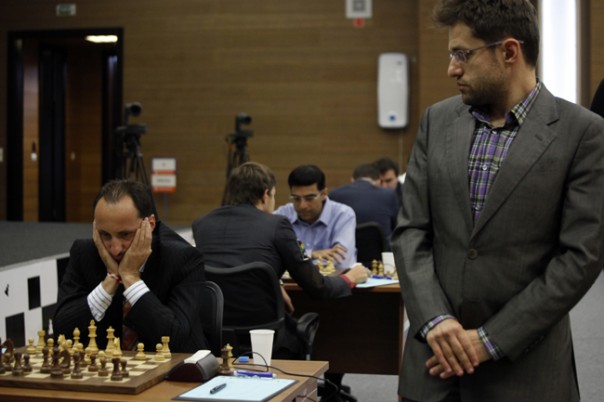 Levon Aronian also came to watch the ex-World champions’ game, while his opponent Dmitry Andreikin considered his next move. 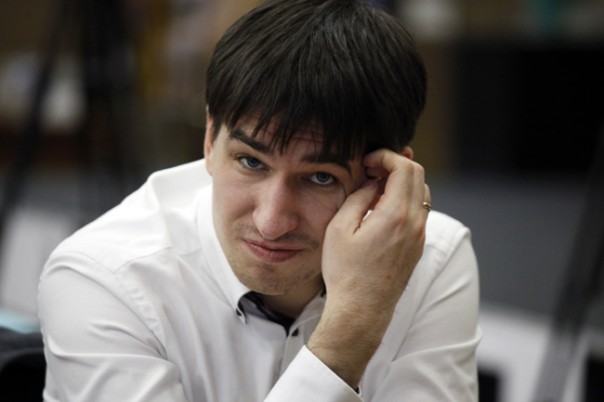 Playing against the world second-highest rated player is surely tough! Indeed, Levon and Dmitry had a very interesting game. 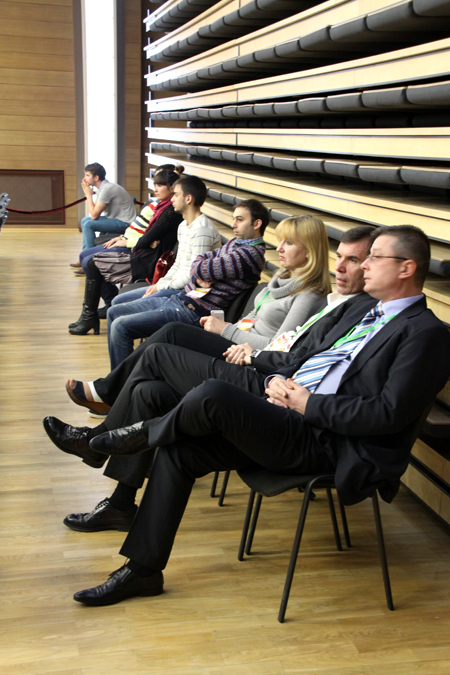 According to the regulations, the accompanying persons can only sit in the last row. 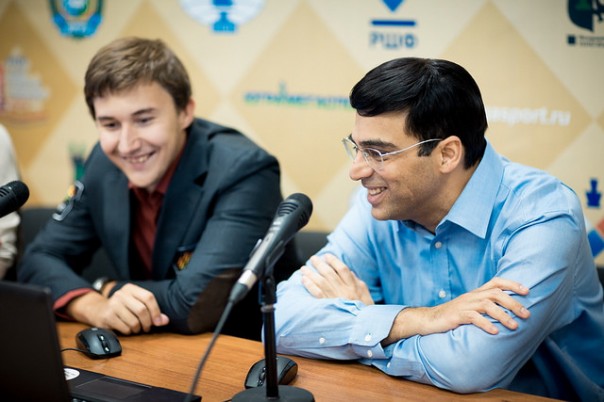 Vishwanathan Anand confessed that he doesn’t follow the Indian media coverage of the event, because he wants to concentrate on his game. 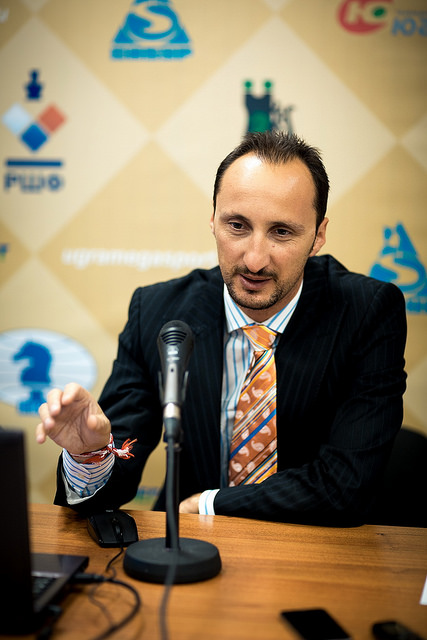 Topalov said he devised a new idea of suspicious quality, but it was good enough to be used in one game. “I thought I could defeat my opponent in positions of such kind – with many opportunities and real struggle, not positional maneuvering without concrete problems, and with a high cost of every move. It was a risky idea, but I decided to take it”. 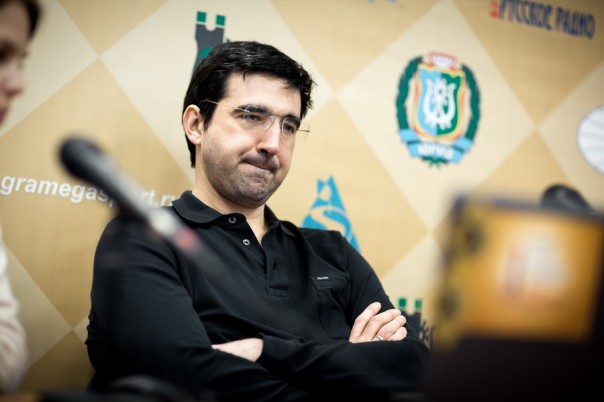 Vladimir Kramnik: “It was a big struggle. The Queen’s Gambit is one of my main openings. Topalov is known for his strong computer-based preparation, and I chose a solid opening to avoid his computer tricks, but my guess was wrong”.

“I cannot blame myself for this game. I played okay, it just didn’t work out”. 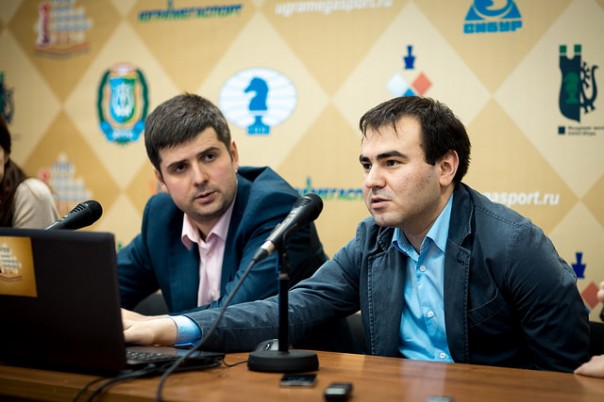 Shakhriyar Mamedyarov: “Honestly, after the first three rounds I was in a fantastic mood. I even said at the press-conference that everything will me okay for me after the free day, because anything can happen in such tournament ”.

Peter Svidler: “I decided to play a new opening to make life of my opponents harder. They should prepare for other openings now, not just one. As for my aggressive play in every game… If you are familiar with my career, you should know that I can very well play without any aggression. And this may be the reason why I never win such tournaments. So my approach [at this event] is correct, I just shouldn’t play like I played today. I lost because of bad moves, not bad approach”. 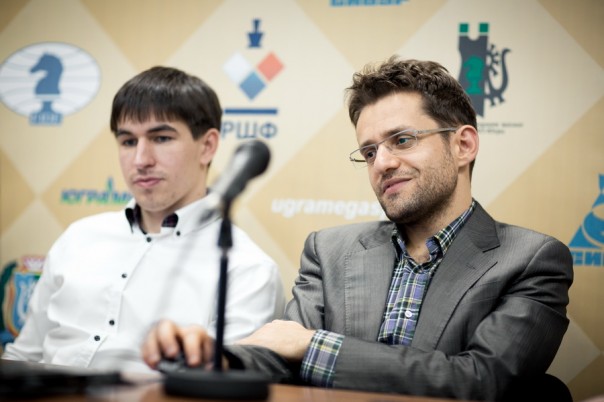 A question to Levon Aronian and Dmitry Andreikin: “The virtual match between Russia and ROW could end with the score 0.5-3.5 at some point today. Is this surprising for you?”

Levon Aronian: “You know, Russians are the strongest players in the world, but people from other countries also learned to play quite well”.

Dmitry Andreikin: “I noticed it during the round and decided to fight to the bitter end. But all in all White dominates in this tournament, so no wonder White won two games today”.

After six round Viswanathan Anand continues to lead with 4 points. Levon Aronian is half a point behind. Vladimir Kramnik, Veselin Topalov, Peter Svidler, and Shakhriyar Mamedyarov have 3 points each. Sergey Karjakin has 2.5 points, Dmitry Andreikin – 2 points.