The weather’s become a little bit colder in Khanty-Mansiysk, but it doesn’t bother us since the battles in Ugra Chess Academy grow hotter every day.  The second round of the FIDE Candidates Tournament entertained the chess lovers with splendid games  and interesting ideas.  The participants got into hand-to-hand fighting and demonstrated uncompromising sports spirit. Did it happen so because the players’ chairs had been changed? Moreover, the organizers gave a new chair to Vladimir Kramnik. 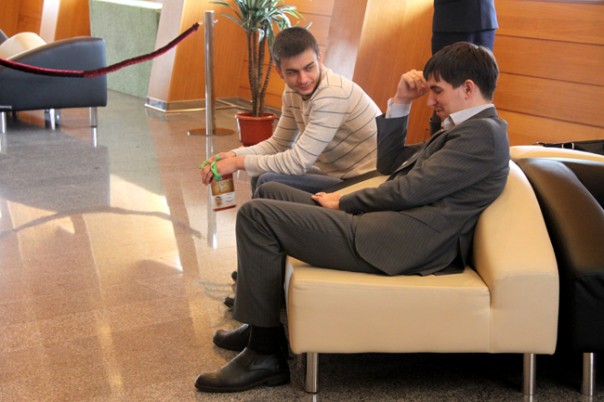 The second is putting Dmitry Andreikin in a fighting mood. 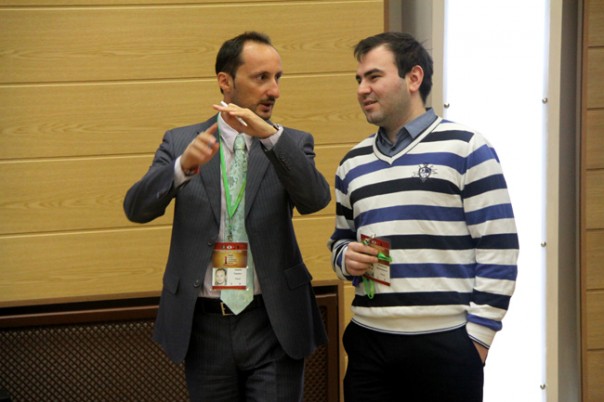 Veselin Topalov is emphasizing his words with gestures. 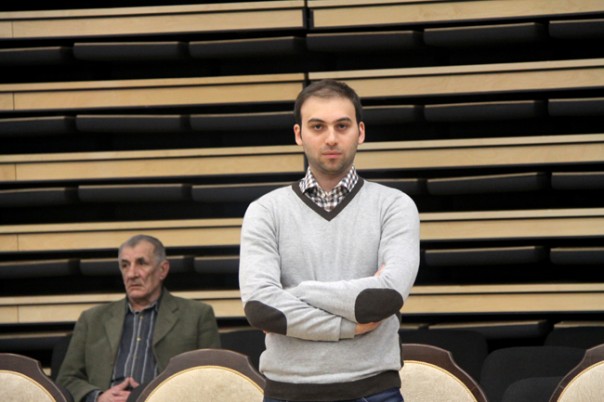 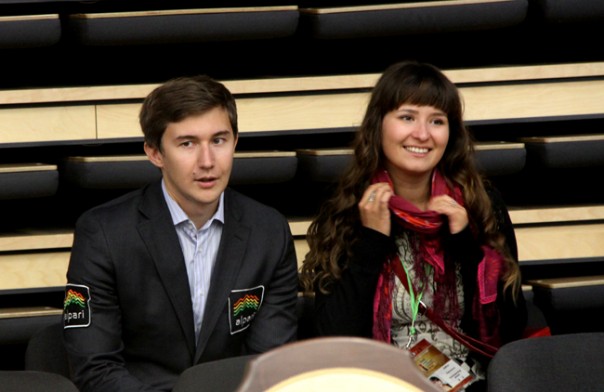 Sergey Karjakin and his muse. 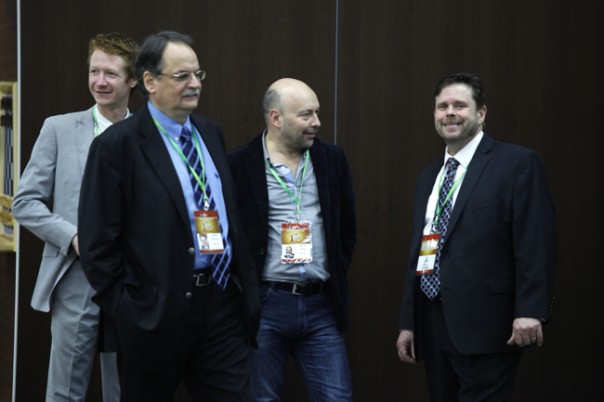 CEO of FIDE Geoffrey Borg with the arbiters. 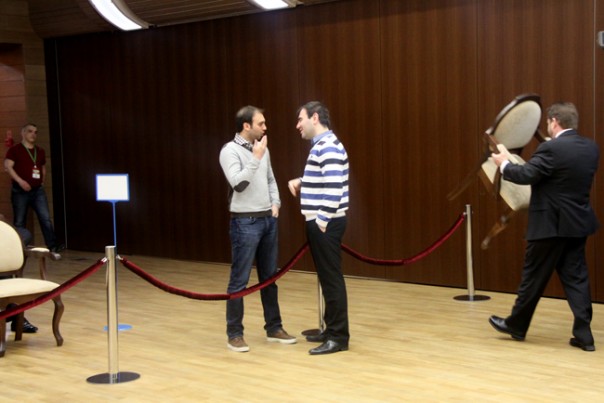 The extra furniture is being removed. 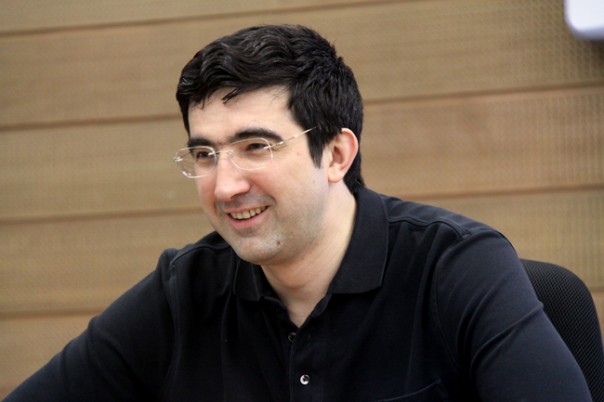 Vladimir Kramnik is optimistic before the game. 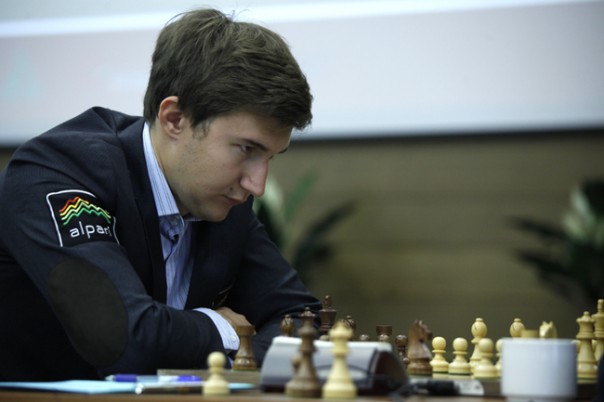 But his opponent isn’t going to joke. 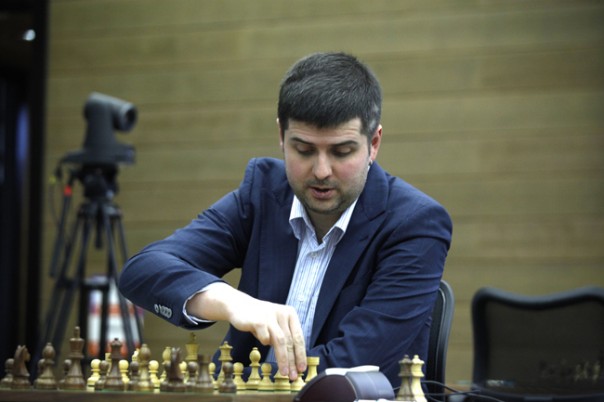 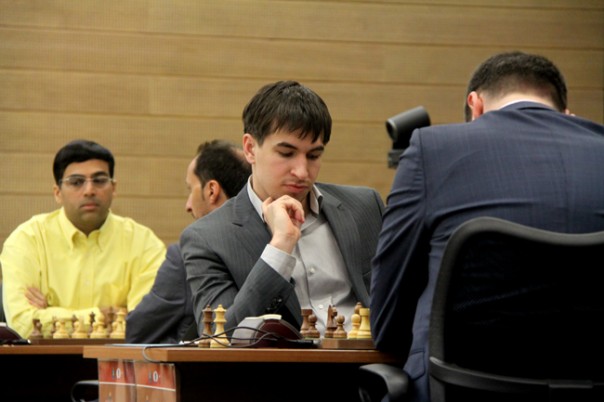 Viswanathan Anand and Dmitry Andreikin are ready to defend. 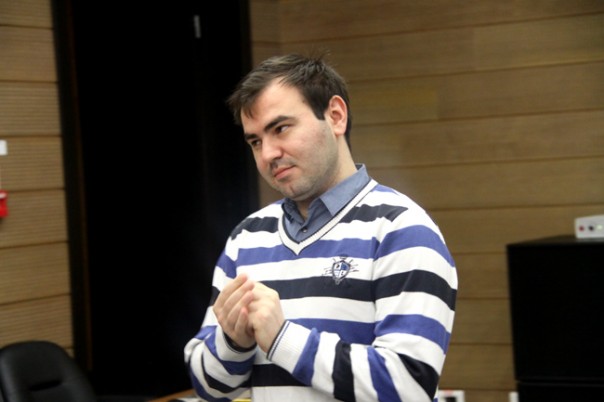 Shakhriyar Mamedyarov is tuning himself for a fight. 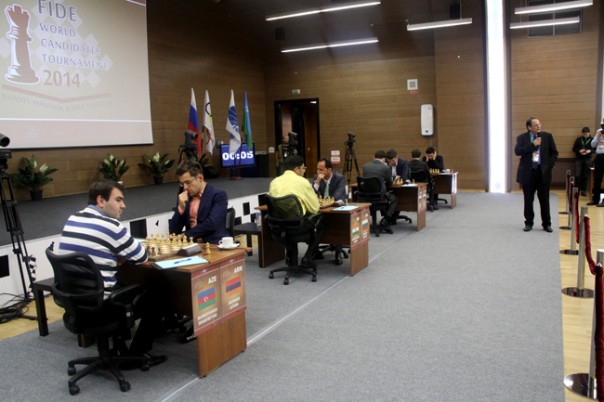 The round is on. 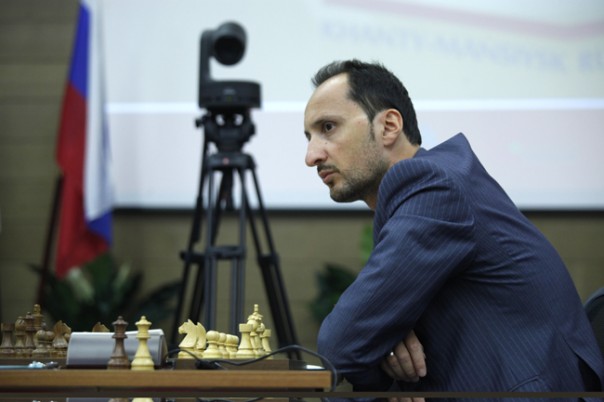 Many grandmasters were recalling their preparation today. Veselin Topalov… 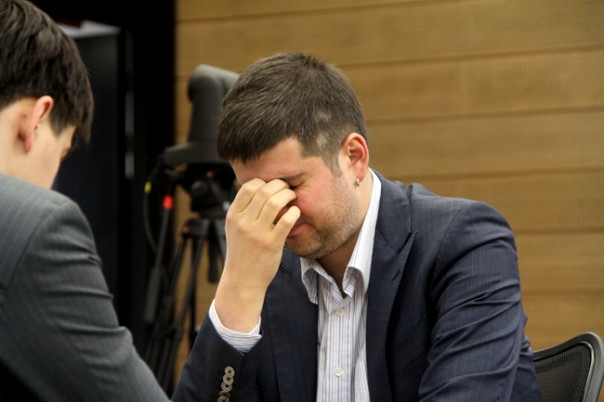 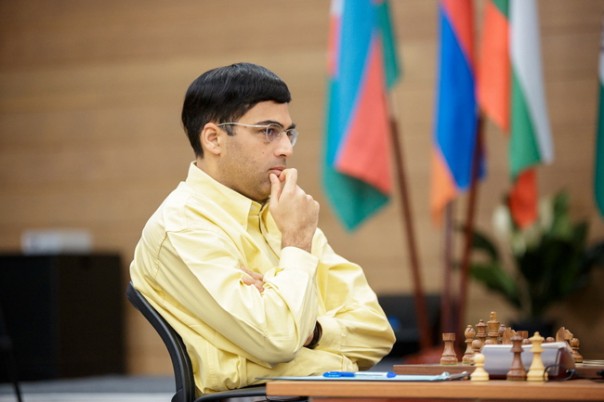 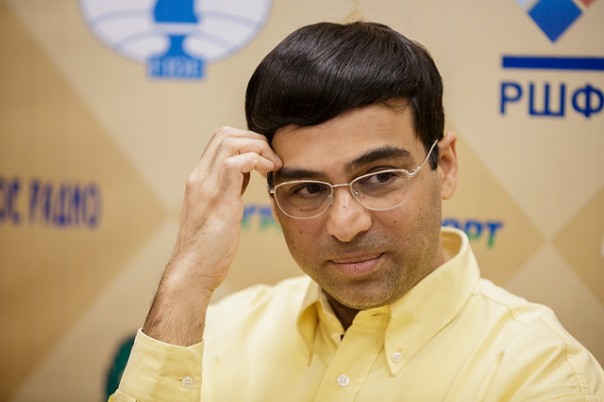 Viswanathan Anand pointed out that in today’s game the opponents had been continuing the theoretical discussion. 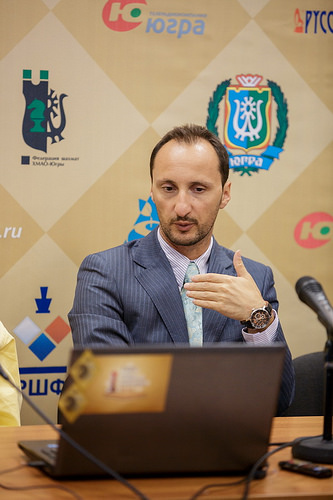 In the official Twitter account of the FIDE Candidates Tournament there was a question for Veselin Topalov about his bracelet.  Is it an amulet for luck? Veselin answered, “No, this is a Bulgarian tradition. In our country people wear it in spring from March the 1st”. 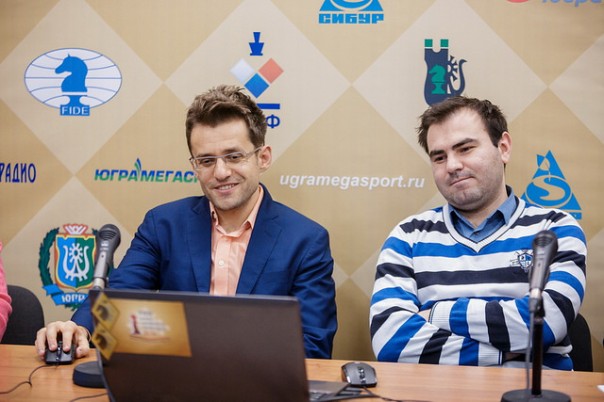 Levon Aronian and Shakhriyar Mamedyarov discussed their game in detail. Shakhriyar confessed that he had noticed White’s tactics only after touching the knight on g6. Also, the h8 square was not very attractive. 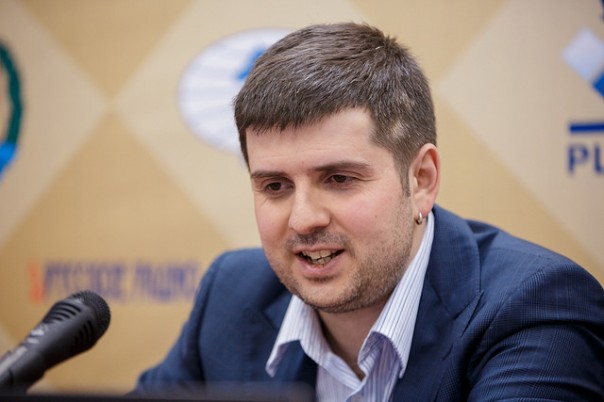 Peter Svidler and Dmitry Andreikin were asked which kinds of sports, popular in Khanty-Mansiysk, they were following and if they would like to watch some match one day. Peter replied that he prefers biathlon to hockey.  He also added that he could think about visiting a match before a free day but never before a serious game. 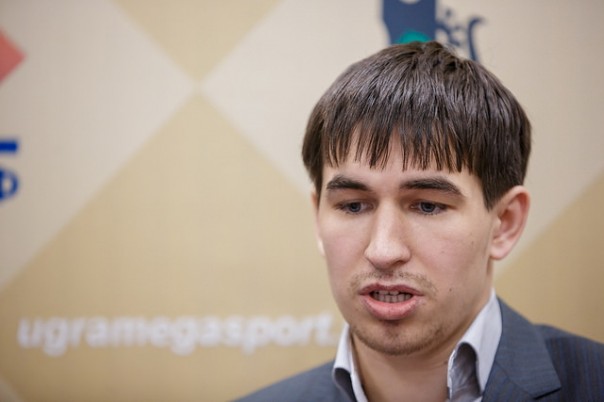 In his turn Dmitry Andreikin told a funny story connected to a football match which had happened to him in Dortmund. 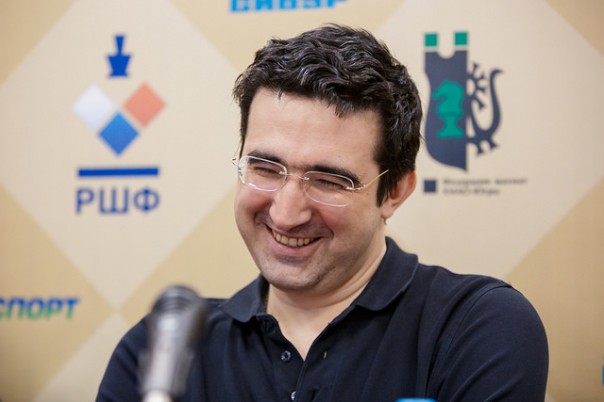 Vladimir Kramnik: «I hope I’m in play but only the next round will show it. Today’s game was not a warming-up, it was quite hard and I had to calculate variations». 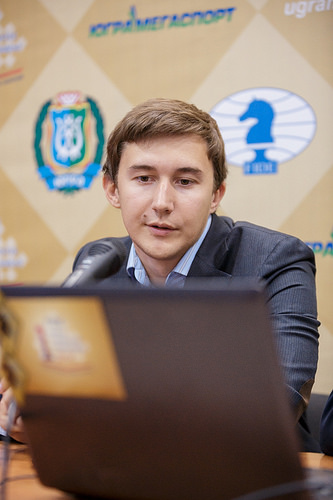 Sergey Karjakin: «This is one of these rare cases when I’m not ashamed of my play, because White was playing very enterprising and interesting”. 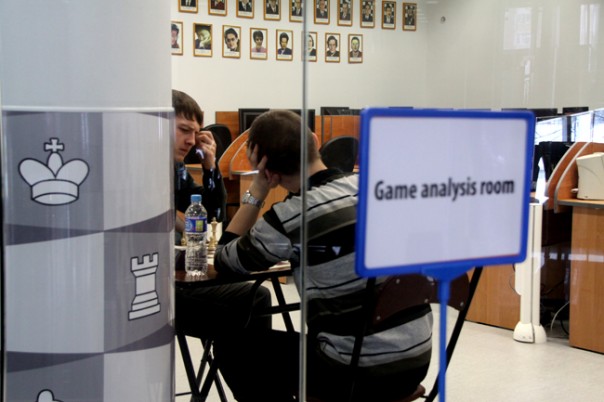 Everybody is playing chess in Khanty-Mansiysk! 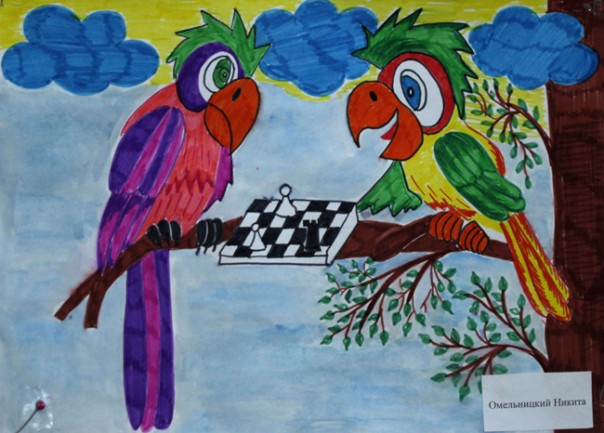 5 thoughts on “Three wins by White”