The second half of the candidates tournament started rather quietly. Although all the players showed their fighting spirit, three games out of four ended peacefully. The only decisive game was produced by Sergey Karjakin, who scored his first win at the tournament, outplaying Peter Svidler. Let’s see how it went. 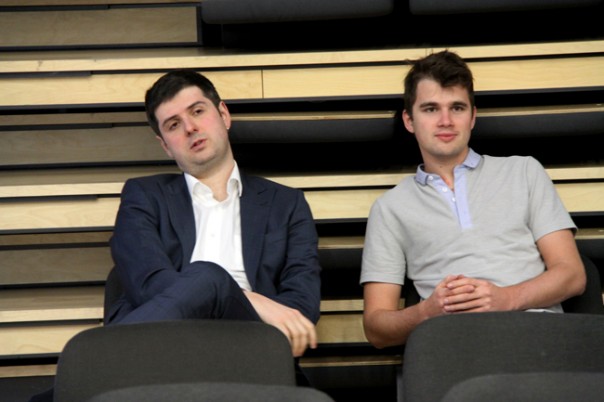 Peter Svidler does not change his habits: first he talks to his second… 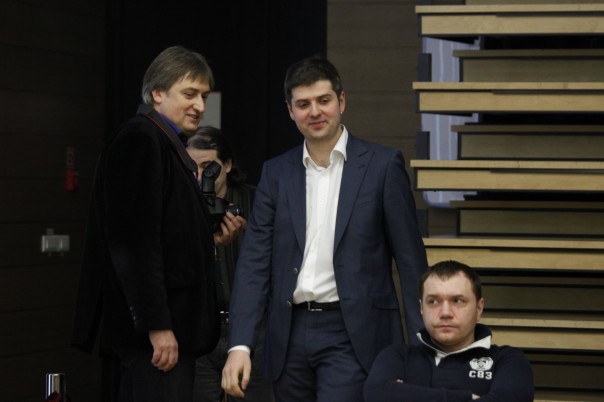 …Then exchanges opinions with Vladimir Barsky. 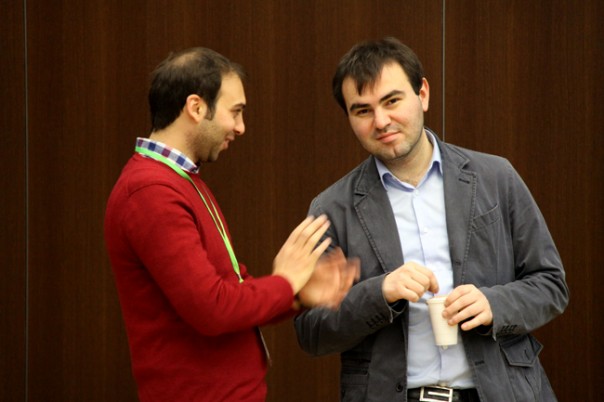 Shakhriyar Mamedyarov spends last minutes before the game together with his manager Rustam Najafov. 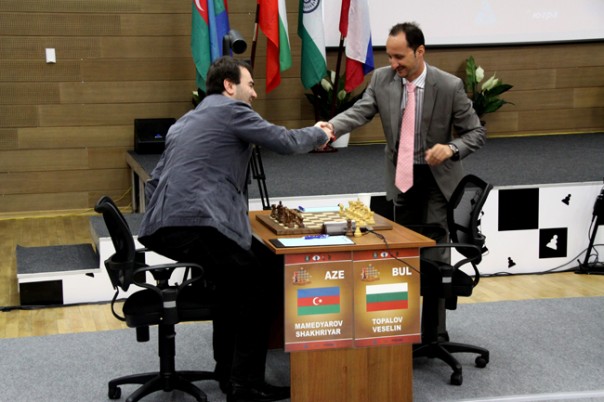 Shakhriyar Mamedyarov and Veselin Topalov are glad to see each other. 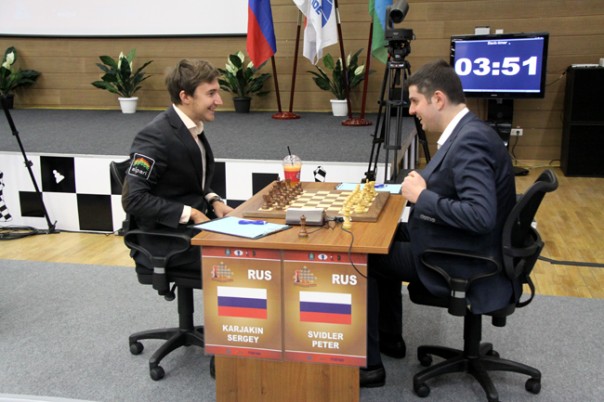 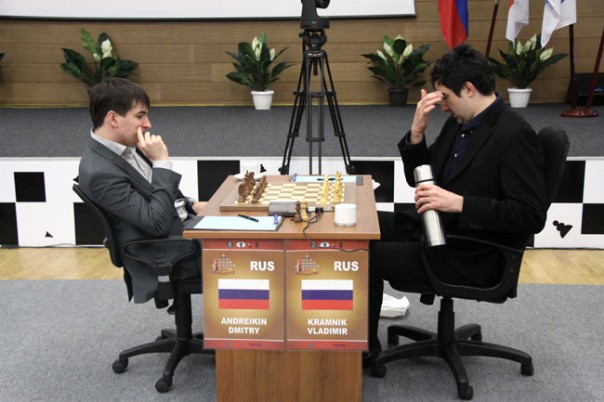 Dmitry Andrekin and Vladimir Kramnik are, on the other hand, completely focused on the game. 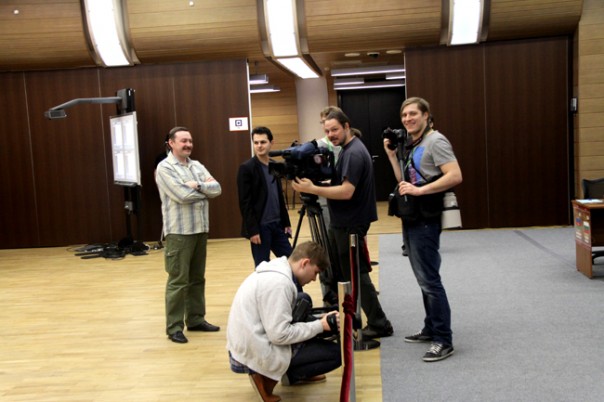 Camera men temporary turned away from the players. 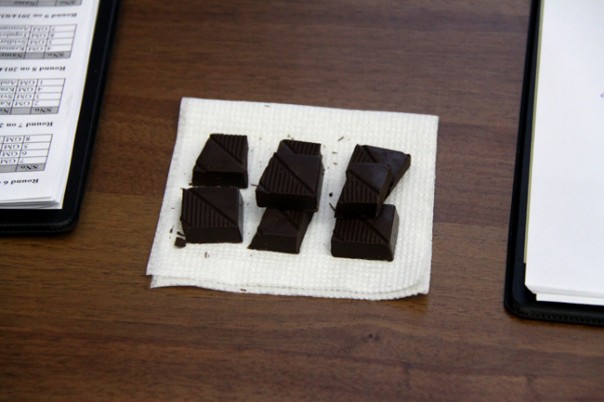 Our arbiters are so creative – they made a chocolate chess board! 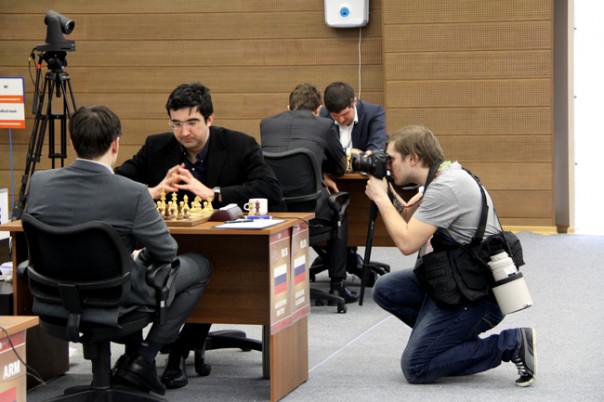 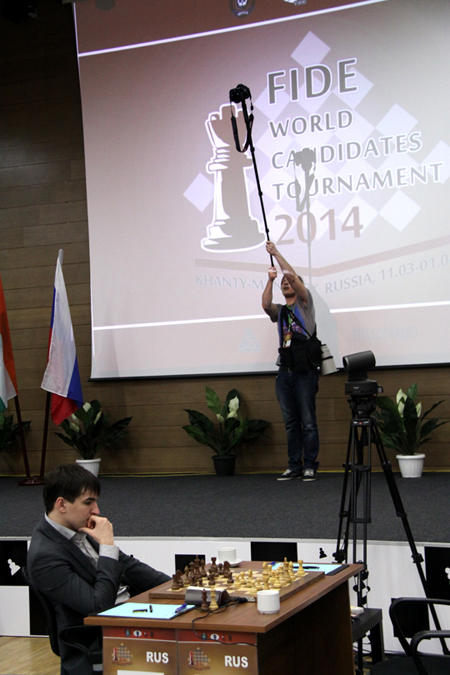 Photographers work is hard and full of terrors. 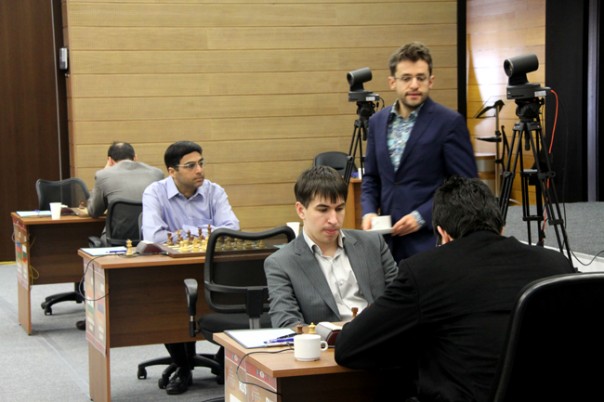 Final seconds before the start. 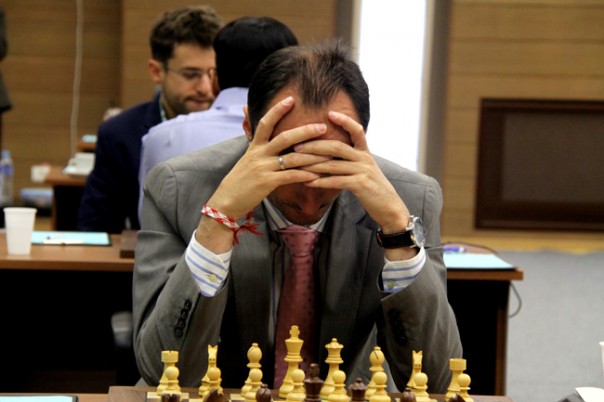 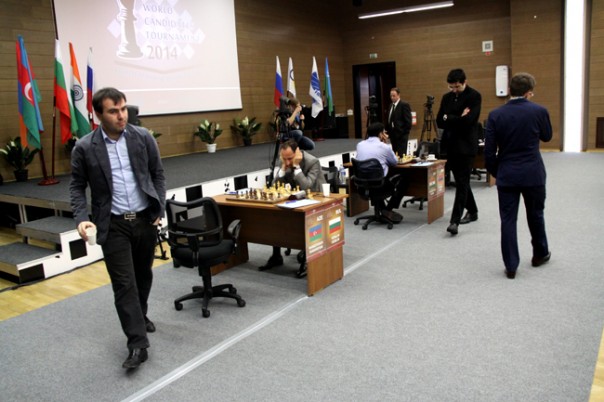 Upon making a couple of opening moves, the players jumped from their seats and started wandering around. 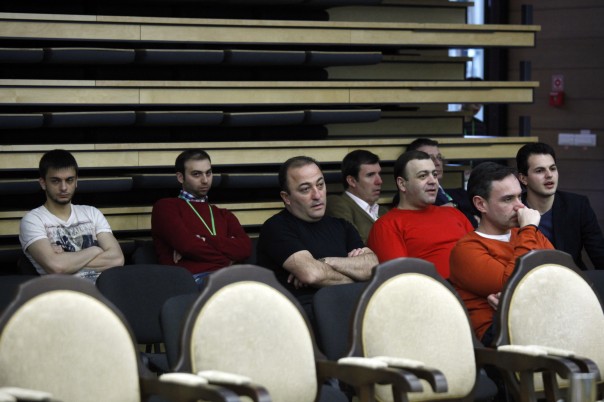 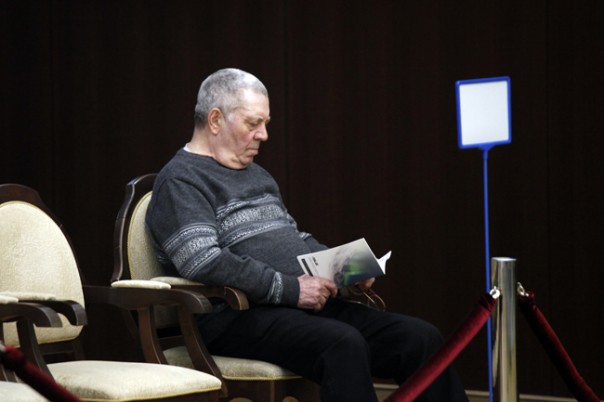 The games are long, so it’s a good time to read. 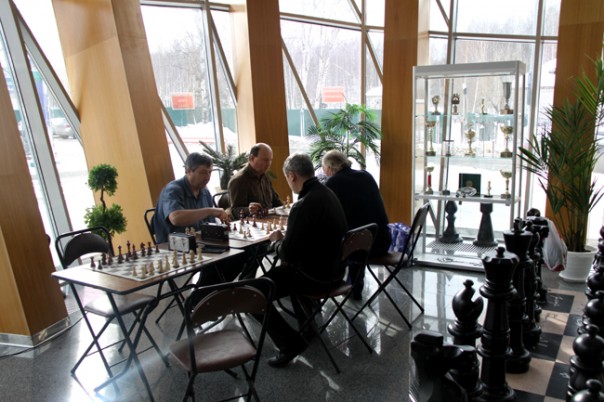 Fighting at the Academy’s hall. 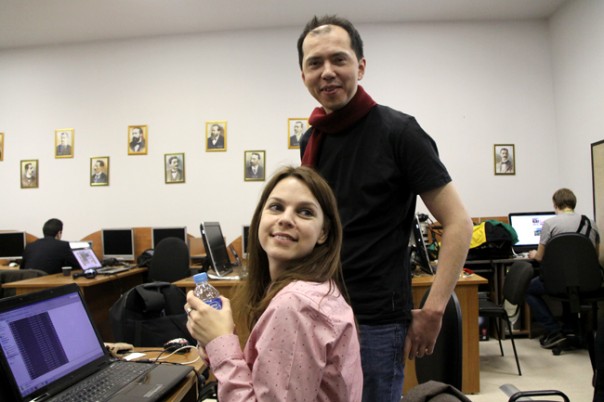 – Rustam, what are you impressions about the candidates tournament? Do you like it here?

– The tournament is a lot of fun, except for the result of my ward. There are many interesting games, so it is perhaps even more fun than in London.

– Victoria Cmilyte said the players have no mercy to themselves. Do you agree?

– I think high level sportsmen generally have no mercy to themselves. They simply don’t have that habit, because everybody wants to win.

– Who impresses you most?

– Everyone. There is so much fight… One could say Anand is a hero of the first half. Not many people expected him to lead after 7 rounds. He played all the games almost flawlessly, except he could calculate 20…Rxf2 against Svidler a bit better. Vishy plays really well. His today’s game may decide the outcome of the tournament because of strange tie-break system. If Aronian does not win, the tie will not be good for him, so he’ll need to surpass Anand. And I don’t think he wins today.

…This game ended peacefully in a couple minutes after this interview. 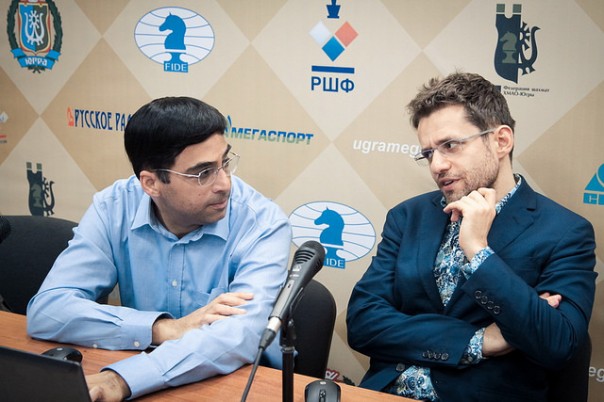 Viswanathan Anand: “In such positions you are not worried about the opponent’s home preparation. Black has very easy plans with transferring the knight to c5”.

Levon Aronian: “I just made myself believe that 3.Qb3 is a good move, but it turns out I overestimated it. This idea came to me during a nap (laughs). Only at the board I realized how difficult it is for White to solve all these problems and get a playable position. I decided to stop fighting because I was too stressed after the opening”. 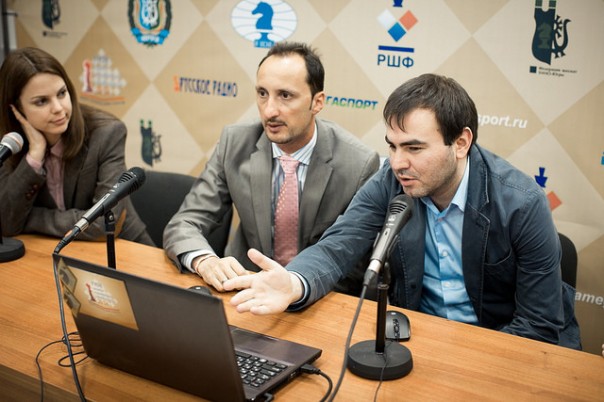 Shakhriyar Mamedyarov and Veselin Topalov analyzed their game in detail. 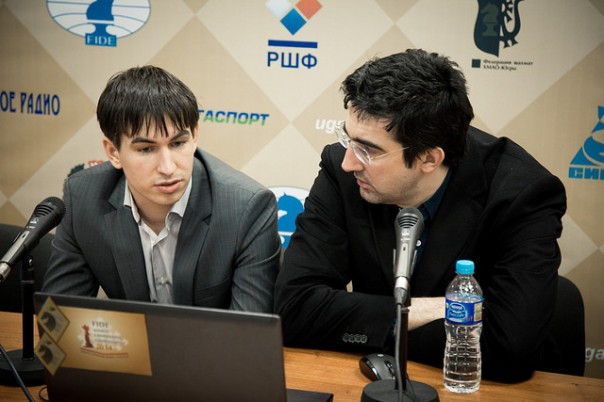 FIDE Press Officer Anastasia Karlovich told the players about Levon Aronian’s nap discovery and asked whether they have ever found any new ideas in their sleep.

Vladimir Kramnik: “I can tell I came across the 3.Qb3 idea as well, but it is such a heresy that I didn’t use it even for rapid chess. Excuse me (laughs)…

I never find any ideas when I sleep. Many ideas come when I work out on an exercise bike, because it is extremely boring and I always think about various positions. However, usually when I check them on the computer, they turn out worthless. I have a bunch of ideas like 3.Qb3, I could play like that until retirement”.

Dmitry Andreikin: “3.Qb3 is a standard idea. I am more impressed about Anand’s 3…d4. Somehow he was prepared for it! I never find chess ideas in dreams, I have dreams of a different kind”. 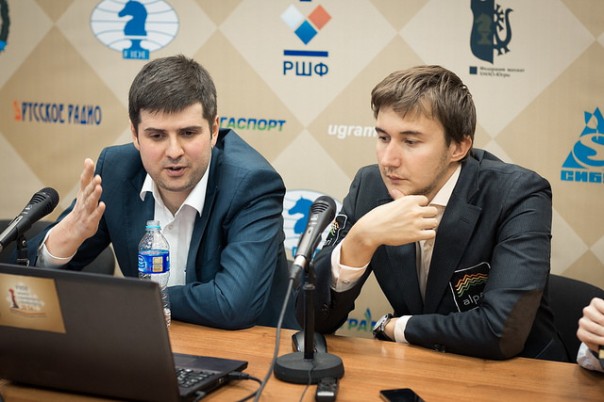 The game between Sergey Karjakin and Peter Svidler was very lengthy, so the journalists didn’t torture them much. In addition Peter Svidler had to go for a doping test. The players analyzed their game. Svidler said it simply wasn’t his day, and Karjakin said he was very depressed yesterday, but received a lot of support from friends and relatives.

Viswanathan Anand and Levon Aronian are still in the lead after eight rounds. However, the tie-break – individual score agaisnt each other – now favors the former World Champion, so Levon cannot be content with a tie. Vladimir Kramnik is half a point behind, and other five players are resting at -1.