Today was the last day of two separate tournaments in Khanty-Mansiysk – a “Russian championship” and an “international event”. As usual, we expected exciting chess, especially bearing in mind that Anand’s chasers needed to play sharp and aggressive to narrow the gap.  However, contrary to our expectations, three games out of four ended in draws rather peacefully, and only in one game the players drew blood. 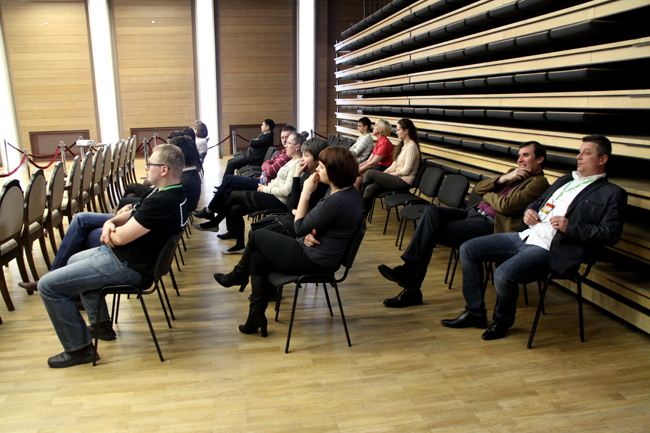 The 10th round attracted many spectators. 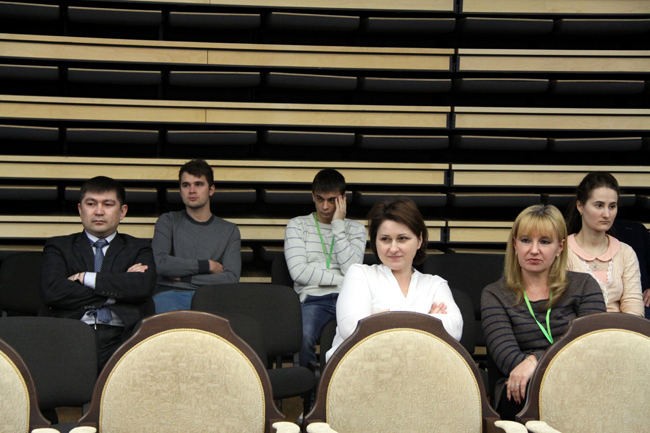 According to the regulations, the second must sit in the rear. 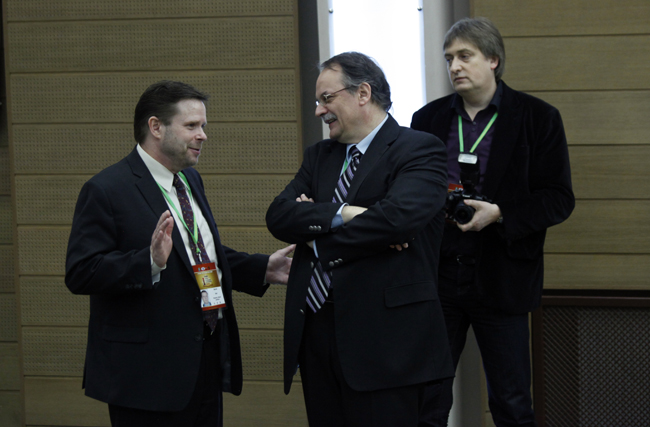 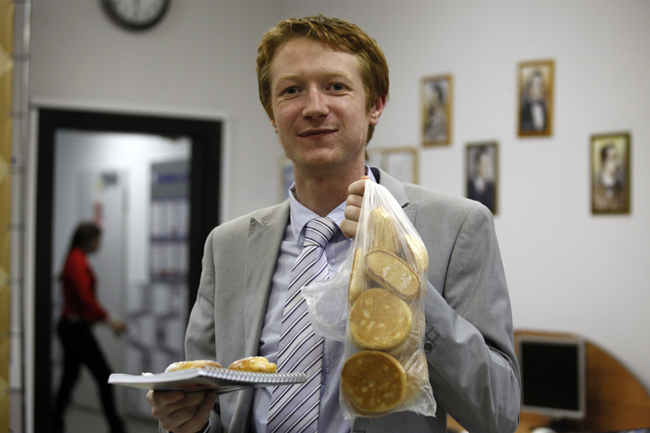 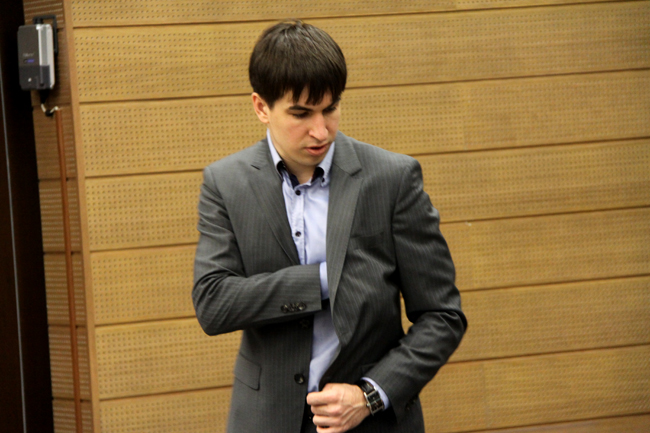 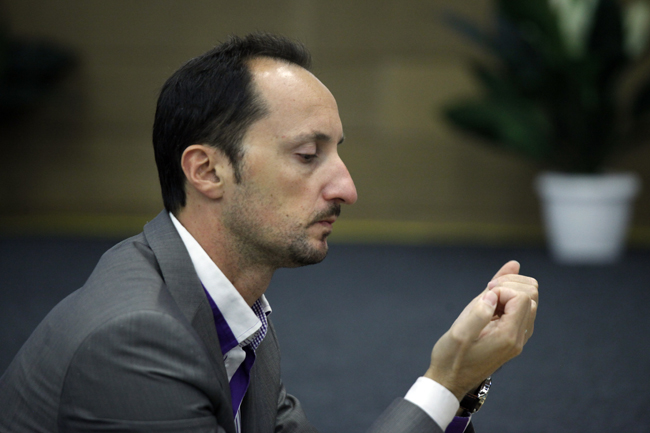 A man who’s active and incisive
Can yet keep nail-care much in mind:
Why fight what’s known to be decisive?
Custom is despot of mankind. 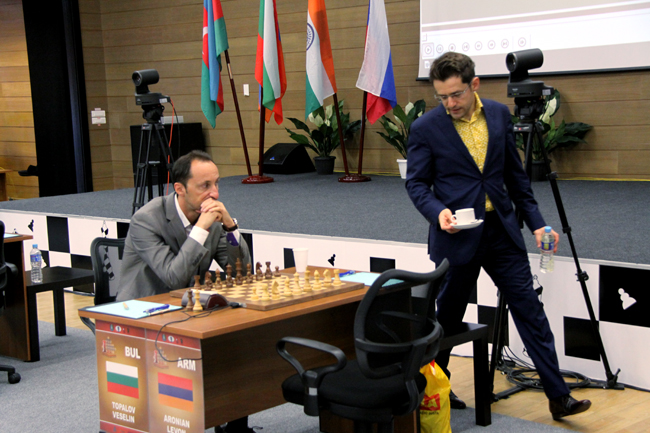 Levon Aronian arrived in a bright shirt and in a combative mood. 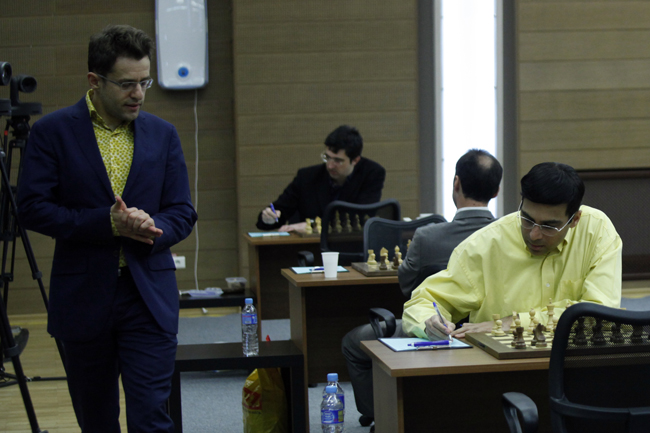 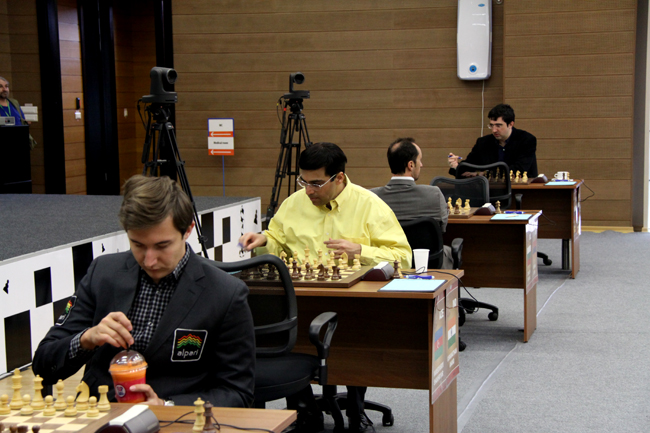 Sergey Karjakin, Viswanathan Anand, and Vladimir Kramnik are getting ready to attack. 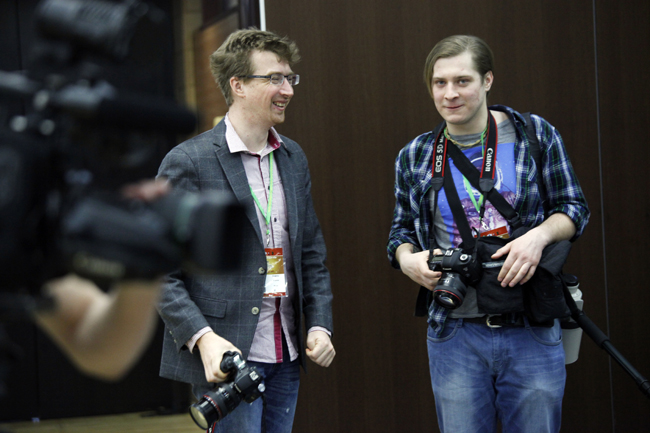 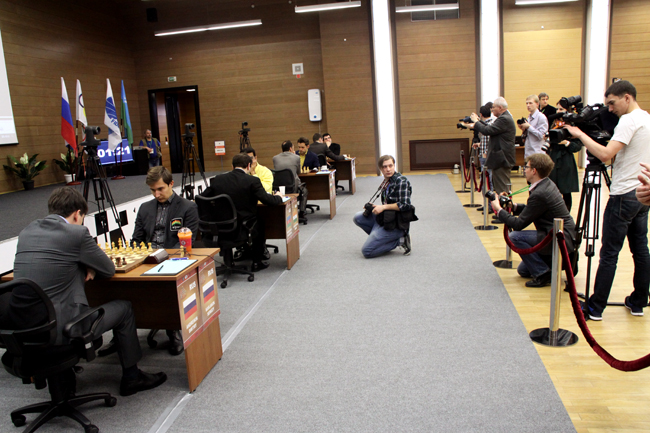 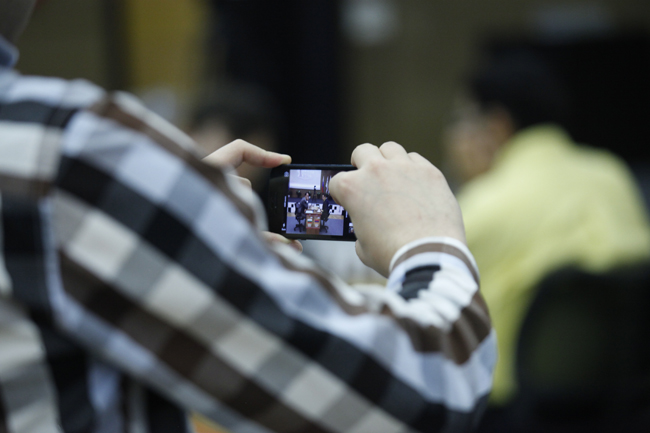 All gadgets and devices are put to use. 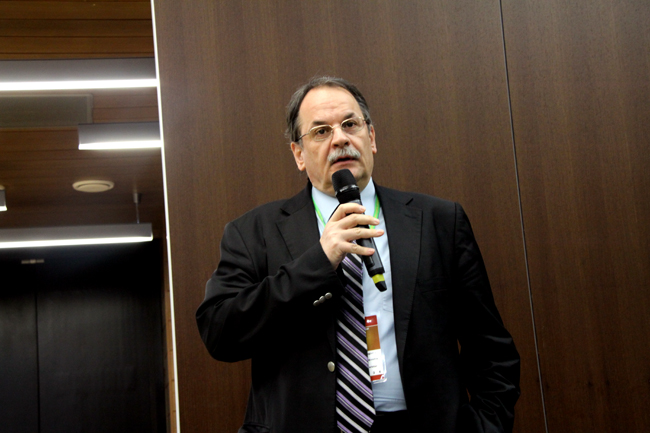 The Chief Arbiter Takis Nikolopoulos announces the start of the round. 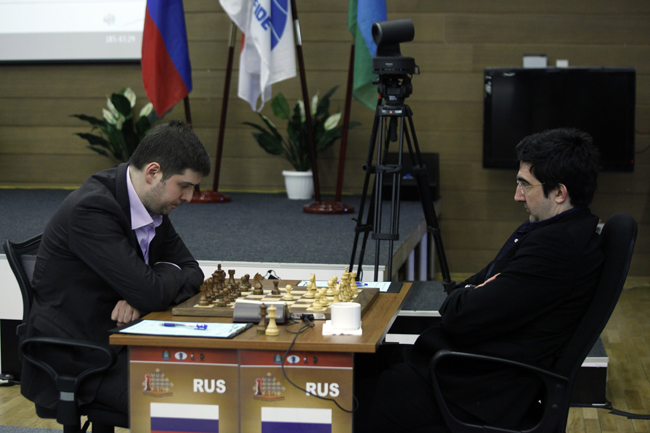 Peter Svidler nearly defeated Vladimir Kramnik in the first half, but the latter survived thanks to a fantastic defensive resource. How will it end today? 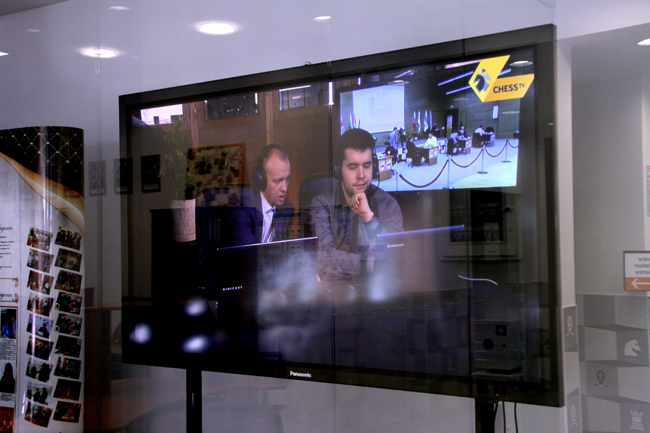 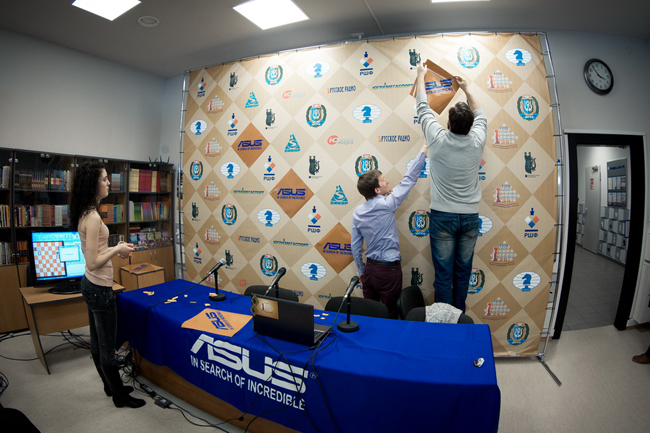 ASUS logos all over the press-center appeared today, as this company  sponsored our online broadcast – for the first time in its history. 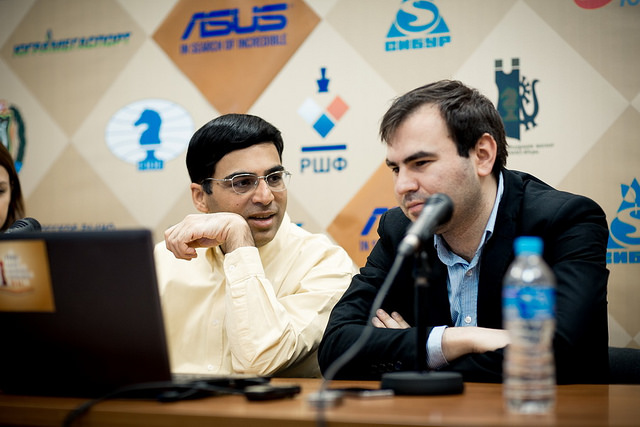 The players agreed that neither of them could afford playing more ambitiously. Playing for a win at all costs was too risky and could result in a loss. 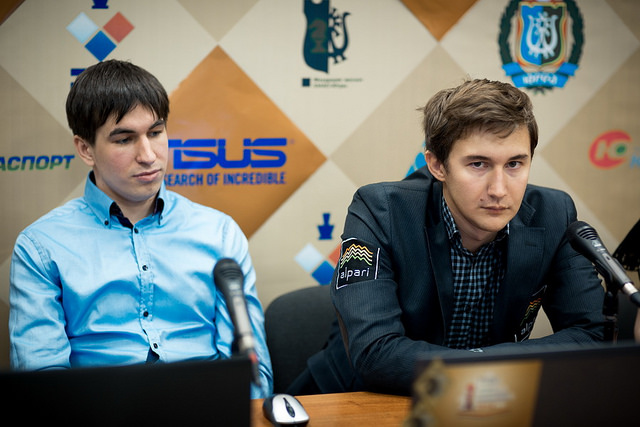 Dmitry Andreikin easily equalized as Black against Sergey Karjakin, using his second Rustam Kasimdzhanov’s favorite line. After the game, however, it turned out they never discussed it together. “As usual, I analyze my openings after the game, not before it”, joked Sergey. 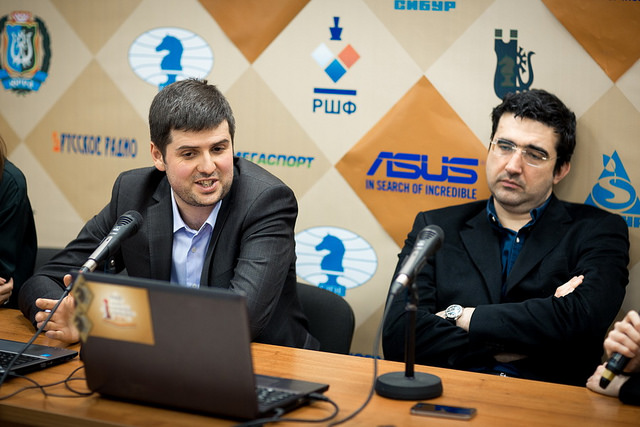 Peter Svidler and Vladimir Kramnik were so focused on their complicated game that the press didn’t torture them with too many extra questions.

Having defeated Vladimir Kramnik, Peter Svidler tied with Sergey Karjakin for the first-second places  in the unofficial Russian championship. For your information, Svidler is a seven-time Russian champion. 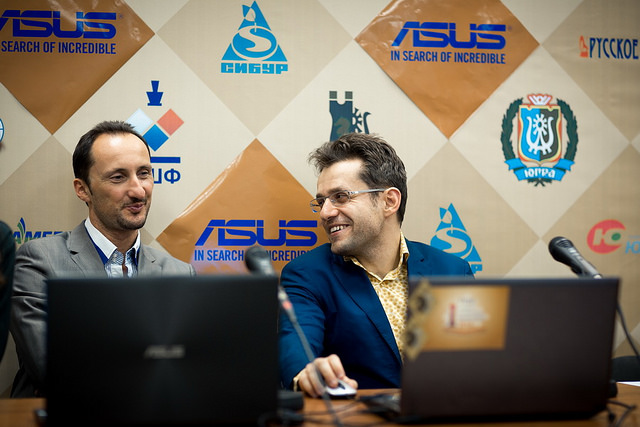 Levon Aronian: “The best strategy is to avoid one-move blunders, which I cannot manage yet. I am looking forward to the remaining rounds, and hope they will be more exciting for me than for other players”.

Veselin Topalov: “I am not satisfied with my play, even disappointed. In three games (against Svidler, Andreikin, and Anand) I had good positions, but lost. If I played well, I’d be competing for the first place. I didn’t plan to play the Najdorf against Anand prior to the tournament, but the sporting situation forced me to be more aggressive, and this is the only opening that allows playing for a win”.