In the battle between two former World Champions, Veselin Topalov started his game with a flexible Reti setup, which is a kind of Bulgarian specialty as their Grandmasters achieve excellent results with white pieces.

It wasn’t a great surprise that Viswanathan Anand responded by lining his favourite Slav structure.

White initiated an early skirmish in the center, but black didn’t hesitate to sacrifice a pawn in order to complete the development.

Topalov’s extra pawn was isolated and came under fire from the black rooks. Black’s compensation appeared to be sufficient.

The queenside got cleared of pawns and white kept a 4P vs 3P advantage on the other side of the board. Anand immediately forced the exchange of the bishops and played the textbook 28…h5 to secure a draw.

Topalov played by the Sofia rules and the point was officially split on move 54. 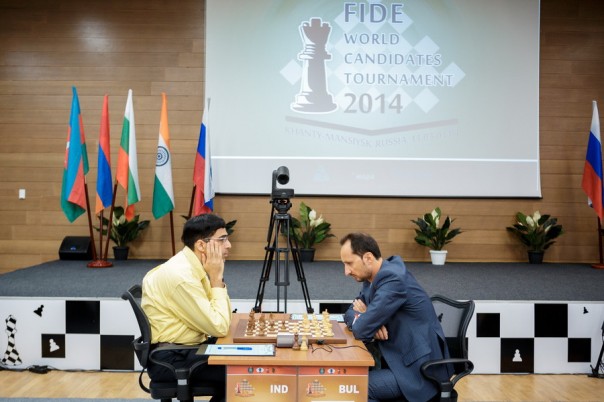 Levon Aronian quickly bounced after the poor start to defeat Shakhriyar Mamedyarov in round two of Candidates Tournament.

Mamedyarov defended with the Ragozin Queen’s Gambit and Aronian avoided the sharpest lines by clarifying the central pawn structure early on.

Aronian pounced on the opportunity to win the opponent’s queen for a rook and minor piece.

However, converting the advantage was not that easy, as Aronian admitted in the press conference. If black consolidates the pieces he could even hold the game.

Aronian advanced his central pawn mass and then proceeded to maneuver in order to reach the time control.

As soon as the time was added to the clocks, Mamedyarov allowed the decisive d5-break and immediately resigned. 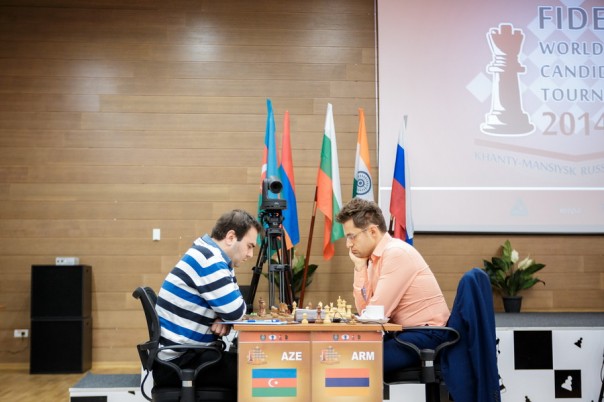 Dmitry Andreikin treated us with an old Sicilian defence, the Labourdonnais-Loewenthal variation. This opening was revived in the recent years as several top players used it with success and a number of opening manuals were published.

Black apparently achieved the strategical aims, he traded the dark-squared bishops and struck the white pawns with 16…b5. But Svidler got some action going with the beautiful sequence that included 17.Qg3 and 20.f4.

It didn’t take long before black cracked under pressure and erred with 22…Bd3. A retort 24.Nf5 revealed the poor positioning of black pieces that allowed all kinds of geometrical motives.

Black threw his pawns forward in the one last desperate attempt. He could only get a rook endgame being two pawns down. After the precise 31.Rd5 Andreikin gave up.

Svidler said that the opponent’s opening choice was a complete surprise. It’s been a long time since he looked at the variations. He conceded that after 11…Qg5 white doesn’t have a slightest advantage. Andreikin agreed and added that he was very happy with his position.

Andreikin disliked 13.b4, while Svidler believes that 16…b5 was rash and suggested 16…Rfd8 instead. 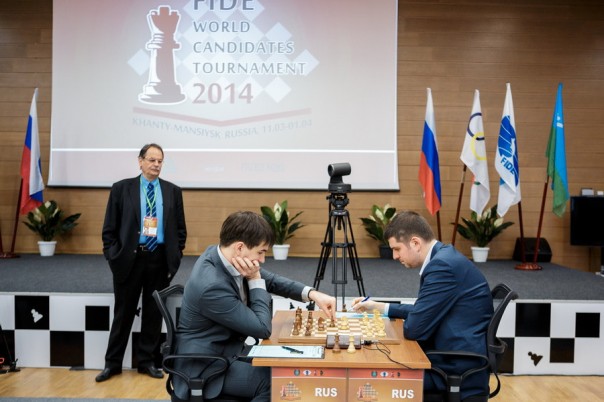 Black won a pawn but his advanced soldier on e4 was weak and a constant target of white’s attack. A rook-lift to c5 ousted the black queen and Kramnik gave the c4-pawn to win the e6-pawn clearing the way for his strong passer.

With Karjakin being low on time, Kramnik sacrificed an exchange to install the knight on the strong outpost.

This was an excellent practical decision as Karjakin couldn’t be precise in parrying all the threats with only minutes on clock. Black dropped the guard and 34.Rc5-35.Nc6 won the material back with interest. Faced with further loses Karjakin resigned.

Kramnik said that he prepared 9.a3 for the last year’s Candidates Tournament, but he didn’t have a chance to use it before. He sensed that Karjakin might play the QGA and he reviewed the lines this morning.

Karjakin thought about retreating the knight 9…N4d5 because he understood that Kramnik deeply analysed the position, but he decided to be principled and took the bishop on e4. 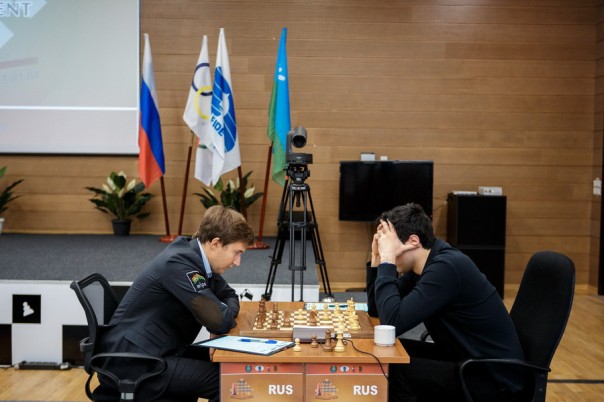 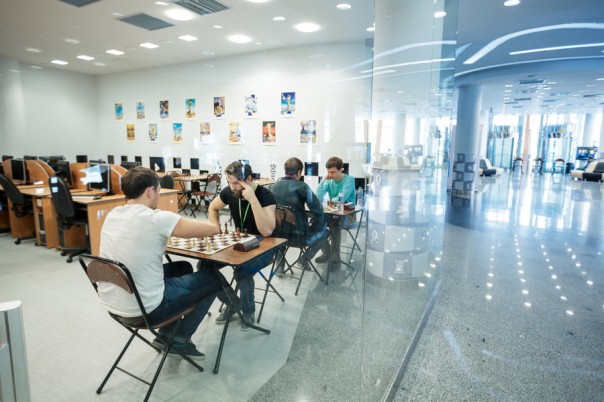